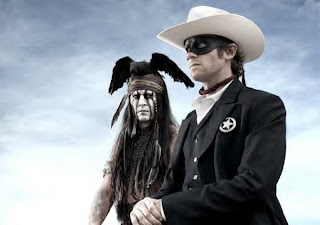 Hi-Yo Silver! With some 12 hours until those midnight showings of John Carter (and I won't be seeing it until Saturday-and I will have a review up as soon as possible) the first image from Disney's other big budget redux of a classic pulp character has arrived courtesy of producer Jerry Bruckheimer http://twitter.com/#!/BRUCKHEIMERJB/status/177771145297264640/photo/1. And well I like the look of Armie Hammer's Ranger-it works. As for Tonto, it's Johnny Depp doing what he usually does-which either means you'll love it or hate it. At least it's different.
at March 08, 2012