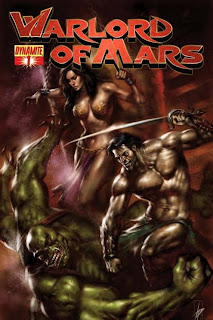 Here's some news for those taking a lunch break. Hope it doesn't cause heartburn.
First up Dynamite Comics are taking pre-orders for the first issue of Warlord of Mars, set for release this October http://www.dynamiteentertainment.com/htmlfiles/viewProduct.html?PRO=C725130152794 which is handy for those without a comic book store nearby. Also according to the site the cover shown above by Lucio Parillo will be a limited special, so you hardcore collectors will know what to look for.
Next up reader Mike has alerted me to this cool site http://pulpsunday.blogspot.com/2010/03/john-carter-of-mars.html by artist Francesco Francavilla that shows off some cool pulp inspired artwork and in this case John Carter of Mars. The site also has some cool art inspired by such pulp characters like The Shadow and Zorro and is definitely worth checking out.
Finally in a non-Barsoom related note, for those who want to see that Pirates of the Caribbean: On Stranger Tides teaser from Comic-Con well Heatvision has it online now http://heatvision.hollywoodreporter.com/2010/07/pirates-of-the-caribbean-comic-con-clip.html I wonder after seeing how quickly the Thor preview was removed how long that one will be up?
at August 03, 2010