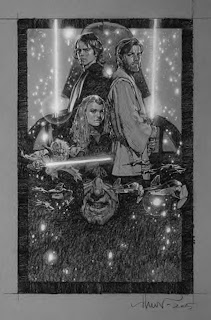 As some can tell, the deleted scene from Return of the Jedi has been removed, so I went ahead and deleted that post. Sorry for those who missed it. But here's some related Star Wars news, along with a glimpse of what could have been on Barsoom.
First up artist Drew Struzan has a new book coming out. If you're unfamiliar with Struzan, you're probably familiar with his work though as he's drawn numerous posters and artwork for such film series like Star Wars, Indiana Jones, Back to the Future, Harry Potter and Hellboy. A new book, The Art of Drew Struzan is set for release Sept. 14 and will feature early versions of some of that work, including the early concept poster seen above for Revenge of the Sith. You can see more about it at http://www.amazon.com/Art-Drew-Struzan/dp/1848566190/ref=sr_1_1?ie=UTF8&s=books&qid=1282073255&sr=8-1. Also coming soon is Drew: The Man Behind the Poster, a new documentary on Struzan and his work. You can see the trailer at http://www.youtube.com/watch?v=sI_ckeUjonE.
Next up and still Force-related, MTV posted a gallery of artwork done by legendary concept artist Ralph McQuarrie that was shown at the Star Wars Celebration this past weekend http://moviesblog.mtv.com/2010/08/17/star-wars-ralph-mcquarrie-art-celebration-v/ Some of it is offbeat-Chewbacca skiing!-but fans might like to see it.
Finally artist Rafael Kayanan has posted some pre-viz art that was designed for director Kerry Conran for the earlier unmade John Carter of Mars film http://rafaelkayanan.blogspot.com/2010/08/barsoom-creatures.html showing off what I think is is a Zitidar. I hope with the movie finally coming someone gathers up all of this art for the unmade attempts and presents them in a book. It might be fascinating to see what might have been.
at August 17, 2010