Retro View: Jason and the Argonauts 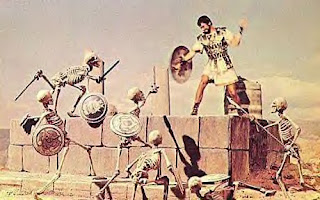 I've been laid up the last few days with a cold so I've had the chance to sit down and re watch some childhood favorites. And this tops the list.
After conquering the kingdom of Thessaly and slaying the king and his offspring, the new ruler Pelias (Douglas Wilmer) is forewarned that a man with a missing sandal will save him and be the cause of his downfall. When he is saved from drowning, he discovers his rescuerer is Jason (Todd Armstrong), the son of the former king who has sworn vengeance against Pelias. Luckily for Pelias, Jason does not recognize him and suggests that to win back Thessaly Jason will need to seek out and retrieve the Golden Fleece, which resides in the kingdom of Colchis. Jason assembles a team to help him on his quest and gets assistance from Hera, the Queen of the Gods (Honor Blackman) and Medea (Nancy Kovack) a temple dancer in Colchis. But standing in his way is Pelias' treacherous son, a giant bronze statute, the king of Colchis, the seven-headed Hydra and sword-wielding skeletons.
When they say "they don't make 'em like they used to" Jason and the Argonauts fits the bill. A fun throwback to when heroes weren't damaged emotional wrecks (hello Dark Knight), villains chewed the scenery and action scenes weren't edited into incoherence, the film goes from one adventure to another, taking Jason and the viewer on his quest. Of course with a movie like this, you have to accept the limitations of the actors (even though I thought Blackman and Nigel Green as non Steve Reeves clone Hercules stood out) or that the script throws in some clunky dialogue. It's all in the name of fun.
The big selling point then as now though is the effects by Ray Harryhausen. Nowadays it might seem unlikely that a visual effects artist or group would be a major selling point (you don't see that many people lining up just because ILM or Weta did the effects) but Harryhausen was the major reason many people went. And while the effects probably won't impress in this day of Avatar, there is a more "real" quality-this is was the work of a man doing with his own hands-not on a computer. And the effects are top-notch-especially the Hydra and now classic skeleton sequence that still dazzles. While it doesn't top my list of the best Harryhausen films (The 7th Voyage of Sinbad gets that honor) Jason and the Argonauts comes a close second. Retro rating:**** our of 4.
at April 27, 2010