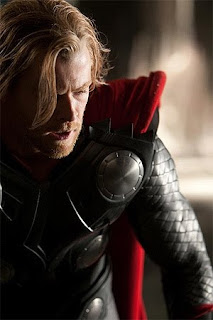 With Iron Man 2 only one week away (at least in the US) Marvel has released the first image of actor Chris Hemsworth as the God of Thunder for next summer's Thor. I admit that the movie hasn't been at the top of my list of movies I've been waiting for-I used to follow the comics but haven't in years and the thought of Kenneth Branagh directing brought to mind Ang Lee and Hulk-but this photo actually looks good, so maybe the movie will deliver. For a larger look at the pic go to http://movies.yahoo.com/photos/movie-stills/gallery/2588/thor-stills#info
at April 30, 2010