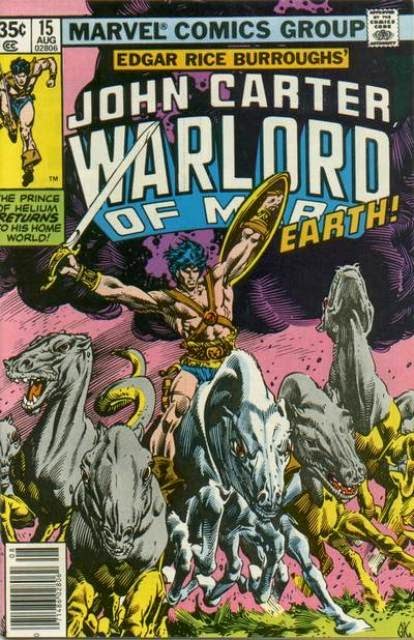 Sorry again for the lack of updates and reviews. I'll try to have reviews of the new John Carter, Warlord of Mars soon but for now we get a two for the price of one retro review as we dive into "The History Holocaust!" and "Tales of Barsoom!"

The first story finds disgruntled scientist Tallus deciding that Barsoom would be better off without John Carter. Inviting Carter to a demonstration of his latest invention, he traps Carter inside a huge computer that projects false lives into Carter's mind, making him believe he is both Theodoric, the man who fell before Attila the Hun, and Antigonous, the one-eyed adviser to Alexander the Great. Knowing his real life alter egos were doomed to die, Carter must struggle to remember who he is or suffer the same fate!

In the second story, Carter relates the history of Barsoom that he learned from Black Pirate Xodar, going from the Big Bang to the Tree of Life and the eventual evolution of every species on Mars.

Wrapping up his run on the series, Marv Wolfman crafts a pretty efficient tale in "History Holocaust" with some tried and true conventions (mad scientists, action and a beautiful woman) that while fun won't be remembered as one of the highlights of the entire series. Still there is some interesting ideas (including the idea of a machine broadcasting fake lives into a living person's brain, owing to Phillip K. Dick) and a rousing ending where Carter does his best Hulk impression. "Tales of Barsoom" meanwhile is a nice addition that provides history for those unfamiliar with the books and it's a shame that Marvel did not carry this over into the future issues.

Picking up art duties for this issue are Walt Simonson (the legendary artist best known for his great run on The Mighty Thor) and series regular Rudy Nebres. Both work well together crafting some nice visuals and character designs that carry the story along. "Tales of Barsoom" boasts layouts by Ross Andru and it does clash with the first story but is still nicely done, helped by eye catching color.

With that we bid farewell to the original team and wait to see what the new one does on Barsoom. Until then folks, Kaor!
at March 03, 2015