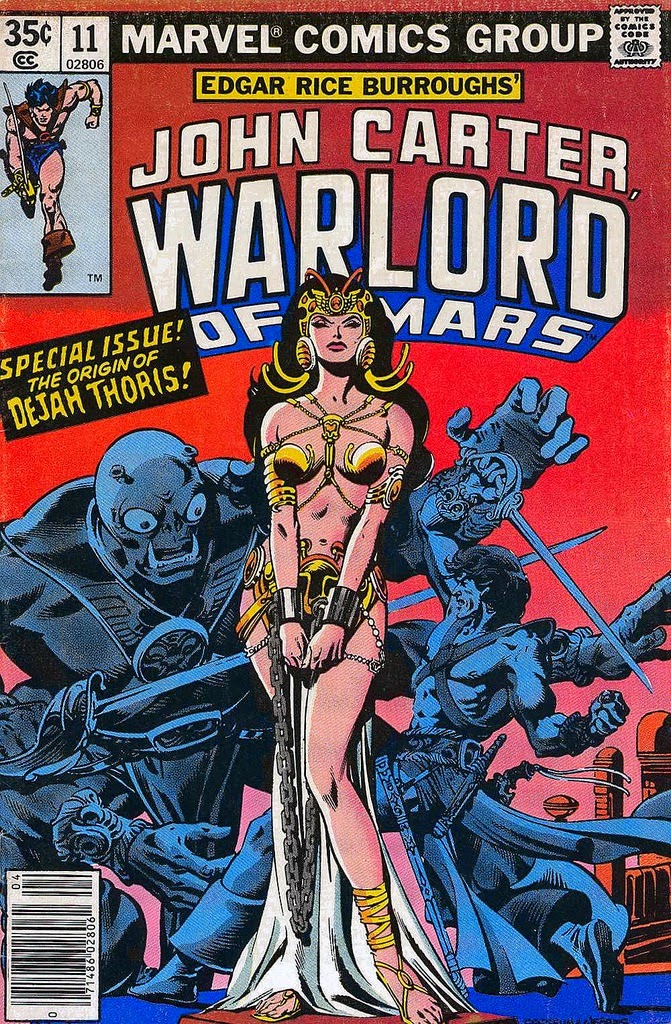 With The Air-Pirates of Mars complete, this issue takes a look back at the historic meeting of the future Warlord and his incomparable princess. So get ready for "The Story of... Dejah Thoris!"

And if you've read A Princess of Mars, well you know the story. Boy goes to Mars. Boy gets captured by green four-armed Tharks. Boy meets girl. Girl is a hot Barsoomian princess. Boy fights to heck and back to rescue her and they live happily ever after (well until that Atmosphere Plant failed)...

With that said Marv Wolfman does a good job distilling those chapters into a quick, 31 page (with ads) comic book and still maintains the magic and appeal of Edgar Rice Burroughs. While some of the story is whittled down, we still get most of the highlights-from Carter and Dejah's blossoming romance to Carter's duel with Zad to their escape-and still understand the story, even for those who never read the book. In fact this is probably the best issue of the entire original run since it sticks close to Burroughs.

Taking over art duties after Gil Kane's 10 issue run is Dave Cockrum and Rudy Nebres and they manage to create a beautiful comic book. The characters-from the Tharks to Dejah Thoris herself-are rendered wonderfully as is the action sequences and quieter moments. It has that look that comic books don't seem to anymore and that makes for a nostalgic trip not only for Barsoom fans but comic fans period.

So with this stand alone issue we get not only one of the best in this series but in the entire history of John Carter of Mars comic books. Track it down if you don't have it already. Until next time have a safe and Merry Christmas.
at December 21, 2014