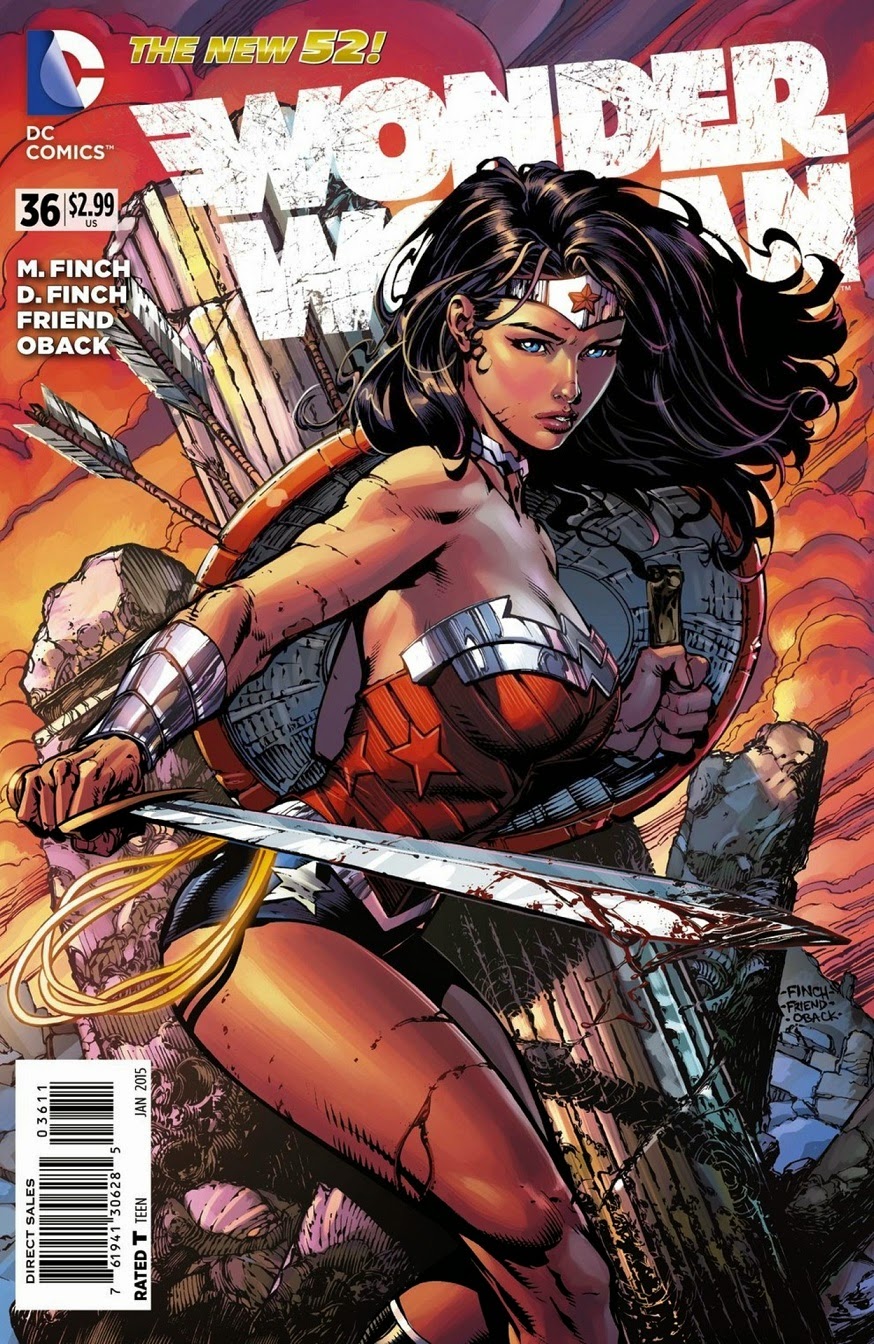 No clever opening here, just an Amazon with a big sword (that doesn't sound right does it?)

As this story opens we discover it's hard to be Diana, AKA Wonder Woman, especially when she has to split her time between her own life, being a member of the Justice League and as the acting ruler (or the God of War) of Paradise Island. But when massive rainfall seems to cause a village to just disappear in Thailand, Diana allows the stress to get to her and results in a smackdown with Swamp Thing and a heart to heart with Aquaman. But when she returns back to Paradise she receives a shock that she may never recover from.

OK confession time folks: as a kid I was more a DC kid than a Marvel one. Maybe it was the TV and movie exposure of their characters or just the fact that X-Men was too damn confusing and filled with too many characters to keep track with. But as I got older the DC characters began to lose interest for me and I gravitated more towards Marvel. Then recently I just completely lost interest with DC's "New 52" concept and their idea that all of their heroes needed to be Christopher Nolan-style brooders. So with that out of the way I decided to give DC another chance with this since I always did like WW. So is it worth it?

As mentioned I wasn't following the series so I don't have the loyalty to the previous team of Brian Azzarello and Cliff Chiang as it appears many do so I wasn't trying to make comparisons between their work and new team (and husband and wife) David and Meredith Finch. Based on some of the reviews I have read some are not happy with the direction of both Mr. Finch's artwork and Mrs. Finch's story but looking at it cold it's not bad on either front. The story helps set up the situation that Diana finds herself in, her feeling that she is being spread thin and unable to cope, which results in her actions towards Swamp Thing. There just isn't much going on except setting up the story arc though so it may take some patience before we see how it pays off.

The artwork has also gotten some flack, notably David Finch's drawings of WW, with some criticizing how almost child like she looks in the face. I can see it but again without having Chiang's version as a comparison so far I didn't have a problem with it. She may seem more feminine and you know what, that's fine. She maybe Wonder Woman but she is also a woman, not a steroid pumping behemoth. Finch also handles the brief action well and the work is nice and colorful.

The question is whether or not I will pick up the next issue. I might just to see where this goes and also go back and try the Azzarello-Chiang run to see how it was. At least she doesn't look like a Zack Synder approved Xena clone. Until next time faithful readers.
at November 21, 2014