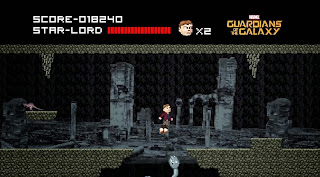 OK if this isn't a special feature I will be really disappointed. With Guardians of the Galaxy coming out on Blu-Ray and DVD December 9, some clips from the bonus features are being released. This one comes courtesy of director James Gunn, who appears as the heroic Galactic Adventurer (8-Bit edition) and discusses the look of the film and his goal to bring a "brighter" look to the space opera genre that hasn't been around a while. So watch the clip and leave any thoughts below.