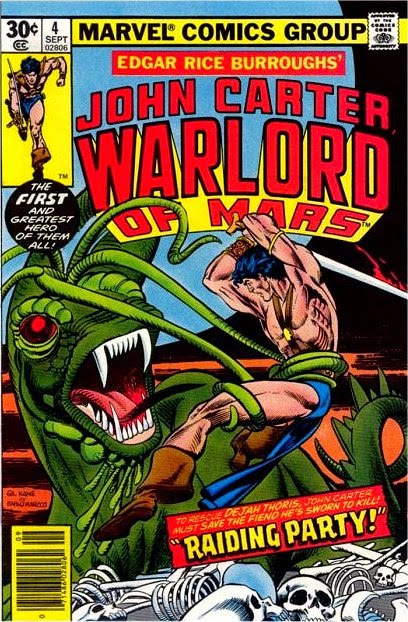 Telepathic lizard creatures who eat people is the least of John Carter's problems in this issue as we join the "Raiding Party!"

With Dejah still a prisoner and that obedience collar around his neck, Carter has become a reluctant crew member of Stara Kan's pirate fleet, pillaging the towns of Barsoom, leading Carter to be branded a traitor to Helium and even suspected in Dejah's kidnapping. Carter struggles to overcome his captors but in their last raid they meet something that forces Carter to rescue the man he hates-T'Rallaa, a mutant creature from another world who has one thing on his mind.

Working back from last issue's unintentional lapse into camp, Marv Wolfman quickly corrects the ship and recaptures the magic of the first two issues, at least until T'Rallaa shows up. Setting up Carter as a potential traitor is an interesting plot point as well as his working with his own worst enemy, since both are elements that Burroughs himself used in The Gods of Mars and Swords of Mars. The idea of Carter also having to save Stara Kan because he doesn't want to lose Dejah add some needed suspense and a sense of the character's true heart (you get the feeling the movie Carter would have just shrugged his shoulders and said "it's not my problem. Where's my gold?) That said the telepathic hungry lizard creature seems like he escaped from Marvel's Godzilla, King of the Monsters series (which was being published around the same time) and just provides a "what the?" moment that the issue barely recovers from. Still it's near the end and thankfully we don't have to endure a long multi-issue story arc for it.

Sounding like a broken record, another thumbs for Gil Kane and Rudy Nebres' artwork. I can't wait to see Dynamite's Art of book since this is work to be pored over and admired.

So with the promise of "John Carter and Stara Kan Fight to the Death!" in the next issue we'll be back then. Until next time Kaor!
at October 28, 2014