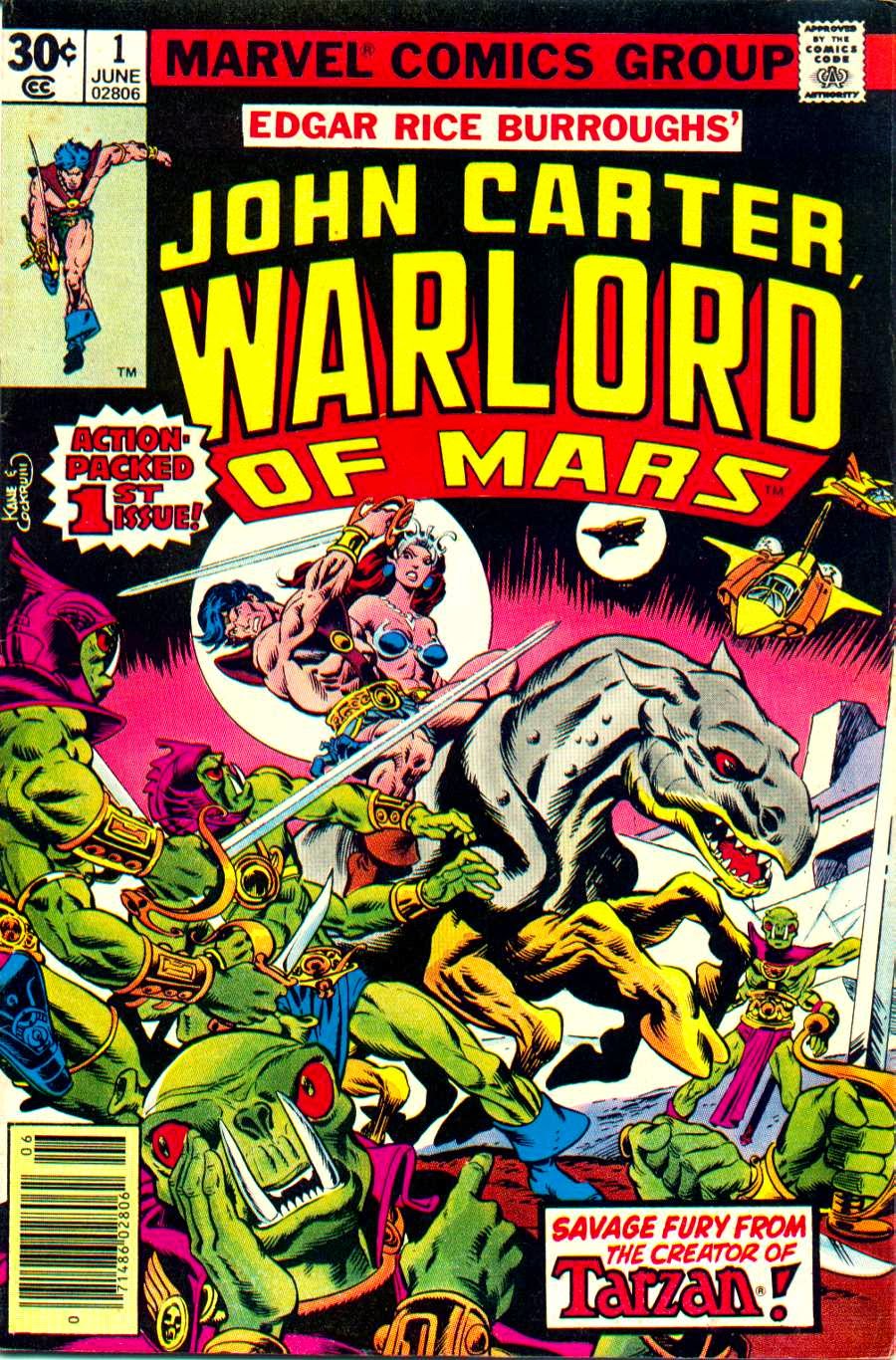 A long time back (before the dark times. Before bad Disney marketing, Andrew Stanton's Mopey Carter and Back to Barsoomers walked the Earth), I reviewed the entire run of Marvel's original John Carter, Warlord of Mars series, rather badly since I did it in groups instead of single issues. Well with Dynamite's upcoming relaunch of the series in a few weeks I thought it was time to do it right and start one issue at a time. If I finish this remains to be seen but for now, get ready for "The Air-Pirates of Mars, Chapter 1."

The story kicks off already in progress as Dejah Thoris has been abducted and John Carter is in hot pursuit of her kidnappers. Rather quickly he finds them, a group of Warhoons, who he makes short work of. While that is going on Carter flashes back to how he came to Barsoom and his first meetings with the Tharks and Dejah. Eventually he finds Dejah and old pal Tars Tarkas, who warns that Barsoom will soon face "a deadly peril" and a plot to destroy all life of Barsoom-FOREVER!

Looking back at this first issue I admit to misjudging it. In fact this might be one of the best Barsoom comics ever as writer Marv Wolfman manages to capture the old ERB magic from page one. Dropping us in the middle of the story might throw some readers but for those familiar with the tales of John Carter it's an amazing fast paced tale that skillfully weaves Carter's back story with the action without bringing it to a dead halt. Also this is John Carter, from his jumping into danger to his devotion to Dejah, this is the character that Burroughs created in a good form without any excess baggage. Some I'm sure will say the characters are even more one-dimensional than their literary counterparts, but considering it's the first issue it does the job well (and without Stantonizing them!)

Helping is the artwork by Gil Kane and Dave Cockrum that manages to bring Carter and company to life. There isn't much in the way of the epic battles we know from the books or later comics but the two artists manage to create a compelling look for Barsoom and handle the action sequences well. Throw in some nasty looking Warhoons, a beautiful and realistic Dejah (no implants here) and rousing color work and you got a great vision of Barsoom that may not suit everyone but it will catch the eye and keep you glued from start to finish.

It will be interesting to see if the energy can be maintained as I delve into the remaining 28 issues (and three annuals) but for now this take is classic and worth it for fans of ERB and the movie. Until next time folks.
at October 15, 2014

Marvel came out with a color omnibus edition in hardback of all their John Carter issues. It was priced at $99, but I picked up a brand new, shrink-wrapped copy at Baltimore ComicCon last month for $24. They had at least 15 more copies. Contact Lehigh Valley Comics and Games.