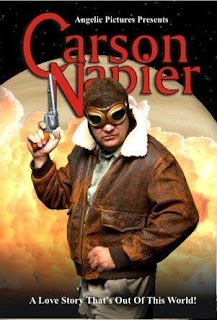 Honestly at this point I expect a John Carter of Mars reboot before this film ever gets made but for those still waiting, the Internet Movie Database is now saying that Carson Napier will be released next year http://www.imdb.com/title/tt1337098/. They also have added the poster shown above, which was only seen on Angelic Pictures' web site so is that a sign that it might be inching towards a possible start? I guess we'll see but as I said I'm not holding my breath.

This sounds like another "John Carter" title. How many people know who Carson Napier is, and why should they care? Of course, we know very well who he is.

I thought they lost the rights for this one? Anyway, all their planned movies have the same cast and crew listed (actor Monte Markham as John Carson, and Rico E. Anderson seems to be in every movie). I won't hold my breath either. We as fans need desperately a good non-Tarzan ERB movie!!