The Legend of Conan: Arnold Returns! 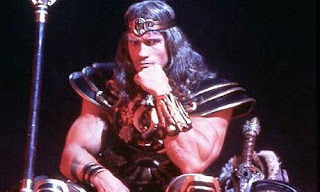 Apparently it's official. Deadline has confirmed that Arnold Schwarzenegger will reprise his role as the Cimmerian in The Legend of Conan, with a release date of 2014 being announced by Universal Pictures and Paradox Entertainment. As for the plot, the film's writer Chris Morgan told Deadline it will pick up after John Milius' 1982 original and ignore the campy Conan the Destroyer and last year's reboot with Jason Momoa. For more info, including comments from Arnold himself check out http://www.deadline.com/2012/10/arnold-and-conan-the-barbarian-reunited-universal-reboots-action-franchise-with-schwarzenegger/
at October 25, 2012