Comic Review: Lord of the Jungle #8 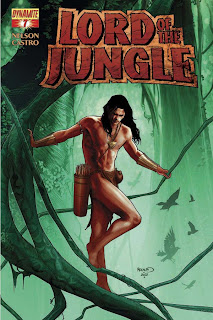 This weekend's other comic book review. Let's just jump in.

After failing to kill Tarzan before, gangster Robert Canler hatches a new plan: Abduct Jane and her father and use them as bait and leave a message for Tarzan where he can find them. And you can figure out the rest-Tarzan arrives and all hell breaks loose. Not much left to say there.

I know this plot description sounds really short but that's pretty much all that happens in this issue. As a bridge between adapting the first and second novels, its been handled well by writer Arvid Nelson, especially in extending Canler's role as Burroughs never did anything with the character afterwards. The story does setup some plot points for the next story arc, including Jane's doubts about Cecil Clayton and a theft involving a possible Russian spy so Nelson is connecting the dots. As for Tarzan he does his usual schtick-beating up bad guys and rescuing Jane.

For the artwork, Sergio Fernandez Davila handles the duties and does a good job with the characters. Given that most of the action takes place in a warehouse there isn't much bright colors or anything that really pops but Davila still manages to keep the action flowing and helps the story move swiftly.

In all not a bad fill-in issue. The next issue promises Tarzan's return to the jungle so we'll see where it goes. Take care and try to stay dry and safe.