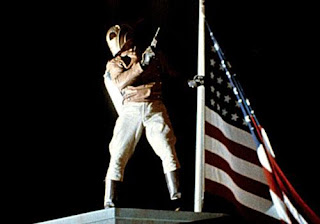 Now this might be cool: According to Vulture, new Disney chairman Alan Horn is said to be working on bringing a new film version of Dave Stevens' The Rocketeer to life. Disney had produced the 1991 film and while it was not a box office hit it has developed a loyal cult following over the past 20 years (with this guy being a member of the cult). You can read more at http://www.vulture.com/2012/08/disneys-the-rocketeer-being-reloaded.html and let us know what you think about it.
at August 21, 2012

OH great. I read this over on The John Carter files where they also said the Back to Barsoom group had an informal meeting with Jim Morris of disney who said, according to them, that John carter "Just might get a sequel but not right now"