Comic Review: Lord of the Jungle #6 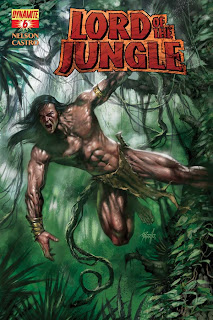 I know this one is a little late. But that happens.
After leaving the jungle behind, Jane and her father attempt to start over by moving from Baltimore to Wisconsin. There is one problem though: Robert Canler, a swindler that Prof. Porter owes money to and has the deed to their property and is willing to forget everything...if Jane marries him. This doesn't sit well with Cecil Clayton who has also put his feelings on the line for Jane. Adding more drama is a wild fire that has spread and the arrival of a mysterious stranger-Tarzan! If you read the novel you know the rest-including a heartbreaking choice for Jane to make-stay in the civilized world or be with the man she truly loves.
With this final issue in their adaptation of Tarzan of the Apes, Arvid Nelson and artist Roberto Castro deliver an emotional and action packed climax that sticks pretty much to Edgar Rice Burroughs' novel. From the arrival of the slimy Canler to the fire to Tarzan's final words, it all comes from the book. Granted this leaves the reader unfamiliar with the book probably feeling a little cheated that there is no grand final battle or fight but that wasn't the point. Instead if was the feeling of wanting what the heart wants but cannot have that both Tarzan and Jane come to terms with. I know that sounds sentimental and melodramatic but it serves the story.
Castro's art is also quite good with a change from the jungle location to America. Like the previous issues more work is devoted to the characters and their designs than the backgrounds but with this issue I felt it worked since the ending is about emotion,not action. I just hope he sticks around for the next issue.
So Tarzan fans there you go. A great and largely entertaining take on the character that sticks if not to the letter than the heart and soul of Burroughs that also manages to make the story accessible to newcomers. Just as long as Cheeta doesn't show up.
at August 12, 2012