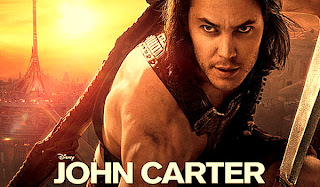 I hope you guys in the US are keeping cool. With that said here's a topic that might cause some steam.
This week sees the release of The Amazing Spider-Man, Sony's rebooting of the franchise only 5 years after the last entry in Sam Raimi's series was released. So far I'm split on whether or not to see it (I love Spidey but I am just not that interested in seeing the origin story retold again) but it has got me thinking, especially after talking a friend about it, whether or not John Carter of Mars should have one as well.
Now I know it's a little early to be considering this but I know there are quite a few fans of Edgar Rice Burroughs who were not pleased with Andrew Stanton's movie and see the idea of a reboot that sticks closer to the books that, while it will not erase the memory of Stanton's film but at least get a "proper" John Carter film on screen. Even a friend of mine who is one of the biggest ERB fans I've met and who said he liked the film said he would rather wait a few years for a reboot than get a sequel.
Now would a reboot work? Well so far it seems to for Batman Begins and Star Trek, both of which were highly successful films both critically and comercially and have led to new franchises. Granted I know some Trekkers weren't pleased with JJ Abrams' film and some Batfans haven't warmed to Christopher Nolan's take but there is no denying that both films resurrected two stalled film series. The other thing about both films-even though you can debate this and I'll understand-is a return to the basics. Nolan's film didn't have the complicated plot of Tim Burton's 1989 Batman with the Joker being revealed as the killer of Bruce Wayne's parents while Abrams returned back to Kirk, Spock and the gang instead of continuing on with The Next Generation crew or new characters. What could make a rebooted John Carter of Mars appealing-at least to some ERB fans-could be a return back to the original books instead of another round of Stanton's take on the material-no shape shifting Therns or moping John. Also another issue is that a lot of times reboots are coming in to make up for films that failed to live up to expectations. While it wasn't a huge hit, the consensus seems to be that 2008's The Incredible Hulk was a much better film than Ang Lee's 2003 film version.
But there is a flip side to this to consider. The first thing is whether or not the fans of Stanton's film will accept it. There has been ever since the film came out a growing-and often vocal-fanbase around the film, most notably the Take Me Back to Barsoom Facebook group, that's main goal is get a sequel greenlighted. Would they be open to a new take on John Carter without Stanton, Taylor Kitsch or anybody else from the first film? One of the major issues that I've seen in some early reviews of Amazing Spider-Man is that the writers admit to being loyal to Sam Raimi and Tobey Maguire. That loyality could make the idea of a reboot unsuccessful since the fans of the original film won't go out of I guess you could call it spite or a feeling of betrayal.
Another issue is whether or not Disney-or another studio-would think there would be any money to be made. Most reboots have come about after an original franchise has run its course-we were four films in before Batman got rebooted and 10 films plus countless TV shows before Star Trek did. They were in essence rebooting a proven moneymaker for a new audience who missed the originals the first time around. But the stigma of John Carter's box office performance might mean that Disney won't be interested in giving a second go. Of course there is a gray area here. The first five novels in the series are in public domain, which could mean that a studio could conceviably think it's a property worth giving a new shot at. Granted Edgar Rice Burroughs Inc might not approve-if their lawsuit against Dynamite Entertainment over their Warlord of Mars comics is any indication-and Disney might not appreciate it since they've crowed about owning the exclusive film rights, but they didn't take legal action against the Asylum over their Princess of Mars film so who knows. Or if anything another studio could consider adapting one of the later books where Carter is only in a brief role-Thuvia, Maid of Mars or A Fighting Man of Mars for example. On the other hand starting over may be the only way to get a new Barsoom film on screen. Will Disney risk another round with Stanton? That may be an even bigger question than should they reboot it?
Finally is the question "will it be any good?" Sometimes rebooting a property can fail to deliver-last year's Conan the Barbarian for example. If there is a reboot of John Carter will it deliver a good movie, one that will win over audiences and critics, especially those who were dismissive of Stanton's film? Or will we get the opposite and get a film that makes Stanton's look like a masterpiece by comparison?
In the end though the question is will John Carter ever return to the big screen, either by reboot or sequel? We'll just have to wait and see.
at July 02, 2012

I can confidently predict that a reboot of the John Carter "franchise" will be a disaster.

The interviews with Michael Chabon convinced me he understood these books at a very deep level.

We wouldn't be so lucky next time.

Look at the recent Conan reboot to see just how bad it could be.

(IMO) Stanton and crew nailed it. No need for such nonsense. Even with no sequels, this one will last and be loved (a la "Legend", "Dark City", "Iron Giant", "The Mist" etc.)

Come to think of it, I'd much rather have it like this... as opposed to Disney "whoring out" Tharks, Banths & Flyers at Walmart, and a Woola Cartoon on XD.

For me the Barsoom series is too precious to be "Lucas-ed Up". As I have told many a Tolkienite: Want something closer to the books? Read the books!

I think a reboot is definitely the way to go as it seems unlikely that Disney will green light a sequel. Personally I'd love to see a reboot as I am one of those hardcore Burroughs fans who was disappointed in John carter and don't think Stanton and crew nailed it.

~~"The interviews with Michael Chabon convinced me he understood these books at a very deep level."~~

I'm sorry but it doesn't show in the movie AT ALL.

~~"Want something closer to the books? Read the books!"~~

Not trying to start anything here but I consider this a cop out argument. One that In have heard many times from fans of this movie. Some people think that we have a problem just because we want a movie that follows the original story more closely. We have no problem, we just know what we want and this movie wasn't it.

This movie didn't get the spirit of John Carter. In the book, he's a fighting man. It's in his blood. He fought in the Civil War, but that's just part of his life, it doesn't define who he is. This John Carter has to be dragged kicking and screaming into fighting. There's a flashback to John Carter coming home and finding that the hated Yanks have burned his house and killed his family. That's not even implied in the book, and is right out of Confederate "lost cause" propaganda.