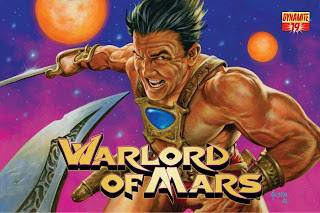 Well that was fast. It seems like only a week or so back I just reviewed the last issue. Oh well better sooner than later.
After the battle with the First Born, the forces of Helium and the Tharks are busy removing the last pockets of resistance. But there are problems-several First Born are refusing to surrender, Thern leader Matai Shang has not been captured and worst of all for John Carter his beloved Dejah Thoris is trapped in the Temple of the Sun. But all of these concerns take a back seat to a new threat-a reverse atmosphere factory constructed by the First Born that will destroy Barsoom. John, Carthoris and a female First Born named Linea band together to stop a high priest of Issus from activating it but find themselves facing perilous pits, white apes and a mad man bent on world destruction. Just another day for our heroes then...
Serving as a the first of a two issue break between adapting The Gods of Mars and The Warlord of Mars, "Worms of Mars" as this story is called is so far OK. Writer Arvid Nelson does a good job portraying John Carter's concern and feelings of loss over Dejah while having him take charge. That's the good news. The so-so news is the attempts at building up a love/hate relationship between Carthoris and Linea. Granted this is before our young prince ever glimpsed the charms of Thuvia but here its mostly the two of them hurling insults at each other which grows a little tiring after a while. Still the major thrust of the story-a First Born Doomsday Machine-is an intriguing one and Nelson does a good job of keeping the momentum moving.
For this issue, the art is being done by Stefano Martino and I'll say it now: It's good. Really good. He manages to bring a nice and clear style to the characters-even though Carthoris is a little too white than compared to the earlier issues. His backgrounds might seem a little bland but there is some really good ones too-the panel showing Carter standing outside the Temple and a panel of the insides of the First Born factory-stand out. There is nothing to distract and it's a good job, even if John Carter is suddenly wearing those pirate boots he used to wear in Marvel's John Carter, Warlord of Mars series.
I'll end by giving this issue a recommendation. I hope Martino continues on with the art and fans of Warlord of Mars will have fun with this issue.
at July 07, 2012

thanks for the review. i seen just now.