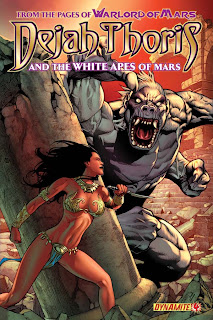 The first of two comic book wrap-ups this weekend finds the Princess of Helium in a final battle with those damn dirty apes. Or sort of...
In this case, communicating telepathically with her son Carthoris, who has arrived with the ship of hatchlings, they blast the apes despite Carthrois' fearing for his mother's life. But she survives and is more determined than ever to discover the secret of the "Battle of the Face of Barsoom." Once there she discovers the truth and that it leads to a terrible revelation involving someone she loves.
After three pretty good issues I was ready for the thrilling conclusion. And what I got was an interesting but not exactly thrilling end. I admit I didn't want some mano-a-mano between Dejah and the ape leader but the ending was still lacking in the action department as writer Mark Rahner spends the rest of the issue wrapping up the mystery of why Dejah and her friends were left there and the "Face" on Barsoom (and yes if you know your Martian history you can figure it out). That said the ending was a good one, giving the series a nice emotional wrap up.
I'll just repeat what I said before about the art, this time by Lui Antonio: I like it but with the apes done there wasn't much in the way of action or horror sequences. Still it maintains the viewer's eye throughout.
With that said, I'll give Dejah Thoris and the White Apes of Mars a ***1/2 out 4 for the entire series. I know some didn't like it but that sometimes happens. Besides if everyone liked everything it would be a boring world. And this series isn't boring! Tomorrow another Barsoom set series comes to a close and I'll see you then.
at July 28, 2012