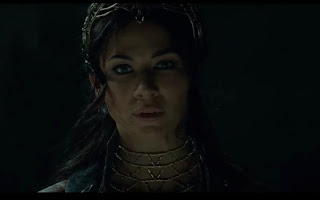 With the Blu-Ray/DVD release less than five days away, Entertainment Weekly has posted on their site the original opening scene from John Carter. This scene features Dejah Thoris (Lynn Collins) presenting her findings to a council but was removed after director Andrew Stanton showed it to the Pixar Braintrust, who found it confusing and Dejah stiff. You can see for yourself at http://insidemovies.ew.com/2012/05/31/john-carter-original-opening/ since EW doesn't allow embedding videos. UPDATE: The scene has now been posted on Youtube so you can check it out below and leave your thoughts on it.