Comic Review: Lord of the Jungle #3 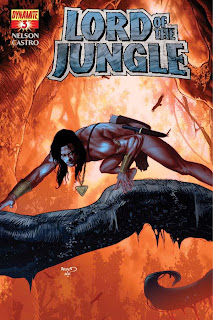 The last comic book review for the week-I think-finds us back in the jungle. For those playing at home, you will notice I missed issue 2 (blame the comic book store for not getting it) so I'll probably have to backtrack at some point. Just FYI.
It looks like Tarzan grew up and Jane and her father's expedition has arrived in the jungle in the previous issue and as this one opens Jane and her maid Esmeralda are about to become panther dinner. But in true Burroughs fashion are saved at the last minute by a muscle guy in a loin cloth who then promptly disappears. Over the next few days the small group-which also includes Cecil Clayton, the possible last heir of the Greystoke estate-find out that the small cabin they're staying in was the last resting place of Cecil's uncle and aunt. As they get comfortable, the peace is shattered when a gorilla packs off Jane and Tarzan must rescue her.
Having liked the first issue of the series, I was interested to see how it continued. And it looks like it's still staying pretty close to Burroughs' original novel. Arvid Nelson, following up adapting the Barsoom books for the Warlord of Mars comics, has done his homework and sticks close to the plot-even down to the "what's the odds" discovery that Jane, Cecil and company happen to be using the same shelter as Cecil's lost relatives. There are a few minor changes, the biggest being a reworking of the character of Esmeralda. In the novel she's portrayed as a stereotyped nanny/maid along the lines of Mamie from Gone with the Wind (in fact to modern readers she might be more racially offensive than the natives). Here Nelson cleverly rewrites her into an intelligent character who points out the Claytons' journals and the fact that the infant skeleton looks more ape like than human, something the Professor dismisses.
Also working in this issue is the artwork by Roberto Castro who delivers a nicely rendered take on Tarzan and company. The lord of the ape has a fierce look that most comic book versions don't, while the jungle is captured in all of its beauty and darkness. His work does have some cartoonish qualities, especially in the drawings of the Professor and almost brings to mind Disney's animated movie. Then again Jane is definitely more shapely than anything Disney did (and yes there is a brief NSFW image that well offers up a clear explanation of why Terkoz the ape and Tarzan get into it. It's nothing extreme but just giving a warning to those who demand modesty).
So while ERB Inc might not be happy with this series I still think it's doing a good job delivering a good take on the ape-man. Next time I'll make sure to get issue 4 and track down issue 2 as well.
at April 23, 2012