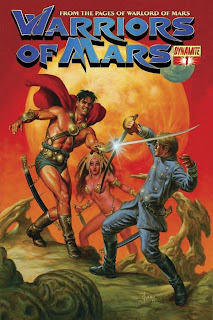 The second piece of news for the day (shows what happens when you're out sick) courtesy of Newsarama: Dynamite has announced Warriors of Mars, a new comic book series that will bring Captain Jack Carter and Lt. Gullivar Jones together. The series will be written by Robert Napton (whose currently writing the Fall of Barsoom series) with art by Jack Jadson and covers by Joe Jusko. The first issue is set for February 2012 and you can read more info at http://www.newsarama.com/comics/warlords-mars-2012-111109.html. (Thanks to Blog in the Bowl http://thebloginthebowl.blogspot.com/ for the post mentioning this.)
at November 12, 2011