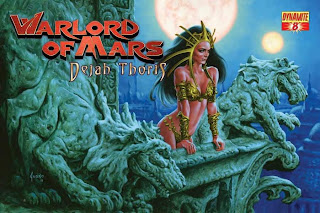 While we wait for the new trailer, here's this week's Barsoom comic review. Just be warned: There will be blood!
When we last left off, Dejah and the pirate queen Phondari and her crew were being led off to be prepared for dinner, in the Hannibal Lecter sense. As this issue opens, they watch the grisly handiwork of the cooks but are saved by Phondari's brother Joktai. But before they make it to Phondari's ship, their host Xen Brega appears, injuring two of Dejah's men and Phondari. Luckily an exploding buoyancy tank allows Dejah and company to escape. Afterwards Dejah discovers the truth behind the mysterious coin she found at the Helium pumping station-the coin is part of a fabled treasure of an ancient red warrior named Segotha-and makes a pact to find it with Phondari. But Xen Brega is not far behind...
From it's opening page, this issue moves pretty quickly, helping setup the threat of Xen Brega and the macguffin that Dejah and Phondari are setting out to find. As mentioned there is a surprising amount of bloodshed here-from the gory dinner preparations to the bloody work of Brega-that might turn off those looking for simple swashbuckling. So if you have a delicate constitution you probably should approach this issue with caution.
That said writer Arvid Nelson is capturing the pulp feel quite well now with the storyline and is equalled by artist Carlos Rafael. It may not please everyone but so far I've been enjoying this storyline more than the "Colossus of Mars" one. Dejah is still well portrayed as a resourceful heroine while her decision to join Phondari-to get funds for Helium to help with its reconstruction-shows the character that is willing to make sacrifices for her people shown in A Princess of Mars. And that's an improvement over kung fu kicking everyone.
So to wrap up it's a bloody tale, but for those who've enjoyed this story arc so far, a good one.
at November 29, 2011