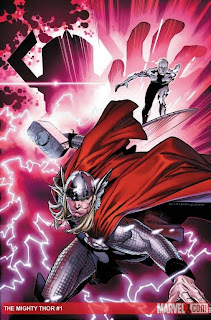 I should have started reviewing this back when it started but other things popped up. So better late than never.

As this series opens Asgard has fallen, the evil Loki has died and been reborn as a young child and Yggsdrasil-the World Tree-has been split following a devastating battle. As issue 1 "The Silence" opens the Asgardians have forged a fragile peace with the inhabitants of Broxton, Oklahoma where the World Tree was broken. But the Tree has gotten the notice of another god-like being,: Galactus the World Eater and his herald the Silver Surfer. While the Surfer flies toward Earth to investigate, Thor and the Lady Sif attempt to retrieve the "universal core" that the Tree grew from. However retrieving it Thor receives an injury that causes him to bleed a glowing light and causes him to express concern that the seed will cause more pain and suffering.
Issue 2 "Neighbors" opens with Thor and Sif training some recruits by pitting them against a "stone colossus." As they go through the training, Odin discovers that the seed is actually an egg and puts it into the protection of the Destroyer despite some concerns expressed by Heimdall. Meanwhile the town of Broxton gets a visitor in the form of the Surfer who immediately tells the townsfolk to run. Eventually he finds Odin and gets...well let's just say the Surfer doesn't take no for an answer...
As issue 3 "The Stranger" opens, Broxton's leading Pastor Mike has taken the Surfer's arrival as a sign that Christ is returning. And that the Asgardians have to go, which doesn't sit well with Volstagg who just wants breakfast. While Volstagg plans his own war, Thor and the Surfer duke it out until Odin steps in. Loki is also up to mischief, taking a lock of Sif's hair but gets caught. But that is forgotten as Asgard prepares for war with Galactus.
Or rather "To Duel Against Galactus" as issue 4 states. But first we pick up with Loki as he brings the lock of hair to three sisters who have plans of their own. After that we're off with the Asgaridans as the engage Galactus and Silver Surfer and Volstagg plans his own strategy. As the citizens of Broxton march, Thor and the Surfer crash land on Mars and the three sisters give Loki the gifts he wants...
And finally issue 5 "God of Carnage" finds Thor still hammering the Surfer (man that sounds dirty). But Odin-in his best Shatner impression has had "ENOUGH!" and injures Galactus, causing both of them to fall towards Earth. Meanwhile Pastor Mike and Volstagg have their face off-which ends with Mike asking to speak with someone else but that is put on hold as the impact of Galactus gets their attention and leads the pastor to believe that God has arrived. Also Loki has stolen the seed and jumps into the shooting beam of light which could save or destory Asgard. And we'll see how it wraps up next month.
Again sorry for the long winded breakdowns. But I figured this one way to get most of it out in one swoop. I have to admit it had been a while since I picked up Thor from the comic book store, but after seeing the movie decided to give the God of Thunder another try and so far have found this series interesting. Writer Mark Fraction has conceived an interesting story, pitting the gods of Asgard against a god-like being, showing off both sides' arrogance and their single minded determination to survive. It parallels hysterically with Volstagg's War-and how even the simple people of a Oklahoman town can't take him seriously-and the concerns and faith of the people of Broxton-to the point they are willing to go to war based on their beliefs which the Asgardians are doing as well.
Also making the series work is the artwork of Olivier Coipel, who captures the Asgaridans in an eye catching style. The characters come to life vividly, even the humans while he portrays the galactic battle scenes with a sure hand. It may not top Walt Simonson's run on the character but it manages to appease this old school fan. And he draws a sexy Sif-yes even in battle armor.
So if you haven't been reading this series, pick it up. I think old and new Thor fans will enjoy it.
at September 05, 2011

Got the 5 issues waiting to be read toghether with those of Siege, Journey into mystery, Fear Itself and some Thor related recent miniseries and oneshots.

Got no time for everything, damn it!!