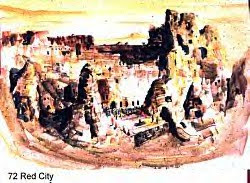 A friend of mine suggested this idea so here goes. With the recent release of concept artwork from Disney's John Carter of Mars (and yes that is the REAL TITLE that fans know and love, despite what a bunch of dummies at the Mouse House think) showing off both Helium and a Barsoomian Flier he thought it might be interesting to see some of the previous attempts to portray both on film. In this case we take a look at three different visions of Helium. The first one up is the artwork (courtesy of http://www.design-concepts.co.uk/Mars/johncarterplaces.htm) shown on top from the unmade Amicus Films production, circa 1977. Sorry for the low pic size but that was all that was available at this time.

Next up is art by Phil Saunders for director Jon Favreau's version from 2006. 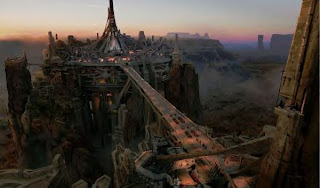 And finally we have the current piece from Andrew Stanton's version, which I believe has been credited to concept artist Ryan Church (if I'm wrong please let me know and I'll correct this. )

And I guess this will lead to this week's poll question-which version do you think portrays Helium best? Take the time to vote and thanks ahead of time.
at July 05, 2011