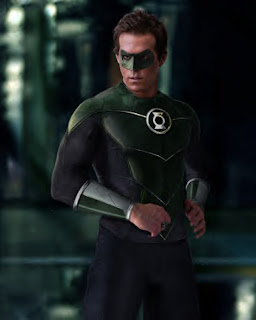 Well I'm sure I'm not alone with this-I hate winter. Hope the rest of you are having at least a safe blizzard anyway. Now some briefs...
First up casting continues on Green Lantern. I know it seems I'm going on about this flick but honestly I always loved the character and it isn't scaring me with bizarre news (see below). In this case Heatvision is reporting that Tim Robbins has joined the cast as the senator father of Peter Saarsgard's Hector Hammond http://www.heatvisionblog.com/2010/02/tim-robbins-green-lantern-senator-hammond.html. Let's just pray its better than Robbins' last comic book flick-Howard the Duck. And before anyone asks-no that is not an official photo of Ryan Reynolds in costume but a cool piece of fan art that has been floating around-so credit to the guy or gal who created it (whoever you are.)
And now for something completely I don't know what...While the cast and crew of John Carter of Mars have apparently been threatened with who knows what if they reveal anything, some news has leaked. First up is http://twitter.com/ChloeBruce_ a page kept by kickboxer and stunt woman Chloe Bruce who has been hired for the film. And boy did she drop a doozy-one day she was painted orange and had "tattoos" painted on. While the orange could be to help create the copper red coloring of the Barsoomians still-tattoos? The other piece comes from Universal Extras, a British company hiring extras. Their site has a recent posting looking for "males to pretend to be workers on an archaeological dig set on Mars!" That and some other listings for male and female warriors are listed here-http://universalextras.co.uk/wordpress2/wordpress-pg-1.2.1-1.0/index.php Maybe it's extras for the scene exploring the ruins when the Tharks attack and capture Dejah Thoris. Or its Raiders of the Lost Thark. It makes you wonder what is going on with this film.
at February 09, 2010

Green Lantern is my favorite superhero since I read comics, I feel fascinated when I watch different blogs interested in Green Lantern news, That make me feel so happy.