Metropolis Gets Restored and Disney's First Trip To Mars 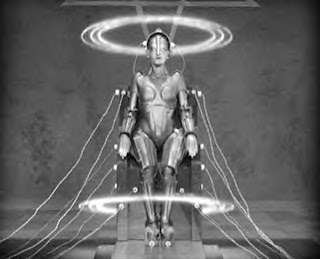 Sorry for the lack of updates. Not much really to report except the snow has melted but we're expecting more. But here's two unique visions getting their spotlight...
First up the restored version of Fritz Lang's silent sci-fi masterpiece Metropolis was screened this past week at the Berlin Film Festival with 30 minutes of previously missing footage that was found in 2008 in Buenos Aries. According to http://www.firstshowing.net/2010/02/13/restored-version-of-metropolis-hitting-theaters-in-summer/ the restored version will be hitting theaters this summer. I've only seen the film twice-once in film class and the second time being the infamous "Moroder" version with Queen and Pat Benatar music. I wonder if that will ever see the light of DVD?
The other piece is linked from http://www.johncartermovie.com/ In 1957 Walt Disney produced a series called Tomorrow Land, looking at space travel as an eventual possibility. One of the episodes was called Mars and Beyond, which used animation to show what was on the red planet. One segment looked at Mars and its use in pop culture from The War of the Worlds to Edgar Rice Burroughs. This video piece contains the animators' vision of life on Barsoom and is definitely worth checking out. I wonder if it will be included on the DVD of John Carter of Mars? We'll see.

Really enjoyed the Martian clip, thanks for posting.