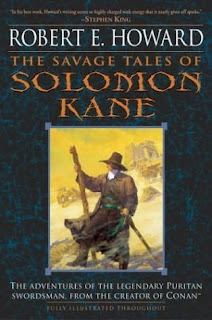 I'm still on vacation from Barsoom so I decided instead to visit with pulp fiction's most famous Puritan swordsman and his adventures. Created by Robert E. Howard and first appearing in 1928, a good four years before his most famous creation Conan, Kane spent most of his adventures fighting against those he deemed evil, even if he spent months or in some cases years tracking them down and pronouncing his own brand of justice. Several of the stories included in the collection from Del Rey pits Kane against foes both human-pirates, cannibal tribes-and nonhuman (one of my favorites of the series, Wings in the Night has Kane seek retribution against giant bat creatures.)

In fact one of the most notable aspects is Howard's combination of a typical swashbuckler with horror, possibly inspired by his admiration for HP Lovecraft (the book even opens with Lovecraft's written tribute to Howard, who he communicated with through letters). Other stories that stick out includes the first one in the set, Skulls in the Stars (with its Washington Irving-Legend of Sleepy Hollow like setting), The Moon of Skulls (in which Kane tries to rescue a friend's daughter from sacrifice at the hands of an African cult) and The Hills of the Dead (which actually reads as a precurser to Richard Matheson's I Am Legend, with Kane going up against vampiric zombies.)

I go could on but just get the book, that way you will be ready for the film that is hopefully going to be released this year. Directed by Michael J. Bassett and starring actor James Purefoy and a strong supporting cast (including Max Von Sydow and Pete Posthelwaite) the film is going to be previewed this week at the San Diego Comic Con. Next to John Carter of Mars, this maybe the film I have the best hopes for.