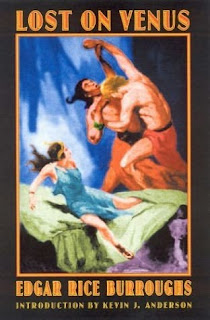 Coming a good 17 years after going to Barsoom, Edgar Rice Burroughs decided to head to Venus with his fourth series. Centered around the adventures of flying ace Carson Napier the series began with Pirates of Venus in 1929. Burroughs then followed that up with this sequel.

Opening like any good cliffhanger does, Lost on Venus finds Carson having been captured by Moosko the Ongyan and a Thorist spy. His love Duare having escaped with help from the last of the Klangan, birdmen native to the planet. After being taken to Kapdor and escaping from the dreaded Seven Doors of Death, Carson discovers Duare has also been recaptured. Rescuing her, the two flee into the forests. But instead of finding safety they find hungry cannibal beast men, wild native animals and the City of the Dead, a society led by Skor of Morov, whose mad scheme is to raise the dead and create his own kingdom. Duare escapes, leaving Carson to get aid from Nalte, a native of Andoo. Again more narrow escapes until the two are brought to the city of Havatoo, a city that has eliminated undesirable elements like war. Eventually Carson and Duate are brought back together but not before more living dead stalk them...

I admit to having a soft spot for Wrongway Carson as he is known. Part of that maybe the fact that the stories have more in common with such pulp sci-fi characters like Flash Gordon and Buck Rogers. Indeed rocket ships, ray guns and the Klangan (Birdmen) all show up and must have been influences on Alex Raymond when he created Flash. Also refreshing is Carson's sense of humor. At one point he tells Duare about the game of golf, summing it simply as a "mental disorder." Also this story in particular is a cliffhanger, with one narrow escape after another. Definetly a fun read.

--The shuffling zombies of the City of the Dead. I wonder how many would think if a film is ever made that the filmmakers were ripping off George Romero.

--At one point, Carson and Nalte take in a Havatoo sporting event, where the players wear according to Carson "g strings." Imagine all the 300 homoerotic comments that would get.

--Duare's constant "stop telling me you love me" routine gets kind of annoying. Then again most 19 year olds are that way.

--Seven Doors of Death. Wasn't that some kung fu movie?

--At one point Carson and Duare are captured by kloonobargan, hairy manlike creatures, I guess Wookies. Later Carson and Duate are to be dinner, tied up ready for the cooking. All I could think of was C-3pO's line from Return of the Jedi-"You're to be the main course in a banquet in my honor." Then again no yubnub song, thankfully. Rating: ***1/2 out of 4
at July 27, 2009