Book Review: The Chessmen of Mars 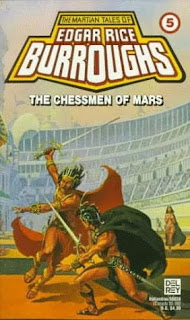 Reviewer's Note: This review has been changed a little from the previous one.
A brief prologue shows John Carter now returning to Earth to visit his newphew, whose just had a bad turn at playing chess. John quickly informs him and us that Barsoom also has its version of chess called Jetan. And he has another child named Tara of Helium.

Following that we meet our heroine, who is just having one of those days. She's expected to attend one of her parents' parties, her bethrothed is busy flirting with another woman and if that isn't enough she's soon gets another admirer, Gahan of Gathol, who Tara dismisses. After slipping away for a night flight she returns to discover her parents unhappy with her leaving the party and the revelation that Gahan has asked for permission to woo her. Again unhappy Tara once again takes to the skies only for the worst storm on Barsoomian record to knock her off course. Then she makes the most horrifying discovery. A tribe of creatures called the Kaldanes, who are living in an isolated area called Bantoom. The Kaldanes are spider-like creatures who can separate their heads from their bodies and replace the bodies when the become weak. Tara tries to escape but is captured and the debate rages whether to eat her or use for other uses (use your imagination). While this is going on Gahan joins the search for Tara and after being blasted of his flier lands smack dab in the middle of Kaldane country. Posing as a passing warrior (called a panthan) named Turan, he rescues Tara's dignity and the two flee, along with a friendly Kaldane named Ghek. Still unsure of their location the trio wander before finding the city of Manotor. And again we get captures, escapes, a bunch of guys who lust after our heroine and some creepy uses for taxidermy.

When I first read the series 20 years ago, I guess I always favored the first three books. They felt complete with John Carter and Dejah Thoris as the leads. Over time I began to like some of the later books more, especially Chessmen of Mars, mostly because I went through my literary horror phase and discovered the likes of Lovecraft and Poe. In many respects Burroughs seemed to be attempting to blend Lovecraftian horror with the Kaldanes and I-Gos, the town taxidermist whose hobby mirrors Norman Bates'. Indeed the first part set on Bantoom is the strongest, with Tara's attempts to escape adding to the feeling of horror. The second part, with Manotor's leader O-Tar first ordering our heroes destroyed and then deciding to have Tara to himself gets repetitive of the first books in the series. But the live action Jetan match is another section that would make a great movie, as it does build suspense as to whether or not Gahan can win.
All in all one of my favorites of the series: **** out of 4
at July 07, 2009