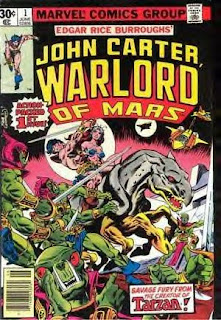 In 1977 Marvel Comics got the rights to publish a John Carter comic. The Jarsoomian's previous comic outings were offbeat to say the least. His first appearance was in 1952 as part of Dell's Four Color Comics series. The covers for that one pictured an older John Carter in a Prince Valiant outfit doing battle with other humans. In the 1960s, Gold Key Comics reprinted them in a three issue series called John Carter of Mars. John's last comic appearance before Marvel was at DC where they used him as a feature for a series called Weird Worlds and in some of the Tarzan series. Then it was Marvel's turn...The series starting out boasting some great talent, including writer Marv Wolfman and artists Gil Kane and Dave Cockrum.

So here we go

The first arc, "The Air-Pirates of Mars" (also the title of issue 1) opens with John running off to find his kidnapped princess, Dejah Thoris and his friend Tars Tarkas who have been kidnapped by Warhoons who are working for a being called Stara Kan. Most of the issue includes flashbacks to John's arrival on Barsoom and his first meeting with Dejah before he rescues them. But the discovery that they were asking about the Atmosphere Factory worries John.

Issue 2:"From the Shadows...Stara-Kan" finds John and company about to leave when they notice an unfamiliar figure. John captures him and discovers it is the mysterious Stara-Kan. Refusing to talk, John takes him back to Helium to stand trial. But before that happens, Kan escapes, revealing his first secret, he's got a robotic arm. (We can rebuild him, Barsoom style.) Suddenly worried, John and Tars take flight for the Factory only to discover it overrun with White Apes. Tars is seemingly killed and Dejah, arriving to help is taken by the apes. John fights but falls and is captured.

We kick off issue 3"Requiem for a Warlord" with John in bondage. Literally, he's chained to a wall. Up above we discover Stara-Kan's real reason for hating the Warlord (he was a soldier in Zodongan Army when John and the Tharks raided it to rescue Dejah.) During the struggle, John cut off his arm and then he was sentenced for war crimes but escaped and has now founded the Council of Five. John attempts to escape but is suddenly racked by pain. He soon discovers that Kan has stuck an "obediance collar" on his neck and can cause pain. That and his beloved held prisoner suddenly makes John his slave.

Issue 4 "Raiding Party" finds John reluctantly helping Kan on his raids throughtout Barsoom. Soon word spreads that John is responsible for Dejah's disappearance and is leading raids on other towns. At the end he must save his enemy from a green monster devouring the townsfolk.

Finally having enough of the slave life, John has it out with Kan in issue 5 "And One Shall Die!" Along the way we meet other characters from the novels, including Kantos Kan and Dejah's father. Of course John finds out Kan's master plan, has his final bout with him and gets his revenge. But the princess is still missing..

Issue 6, "Hell in Helium" finds John public enemy number 1. Now stirred up by other members of the council, the locals of Helium are looking for blood. While John fights to save his life and the life of those yet born, Kantos and company find Tars. It's not looking good for our heroes.

Finally ending this series, issue 7 "Dejah Thoris Lives!" reveals what's happened to her during the whole story. Mainly she's been catfighting with a pissy maid, getting ogled by a former guard of her father's that was let go and eventually fights her way out. John, meanwhile still recovering from his wounds, snaps too and leads the fight to save the Atmosphere Factory and reunites with his love.

Sorry for the long-winded plot snyposes, but that's the way the wind blows. My first reaction was that it seemed the writers and artists were trying to stay faithful to Burroughs' vision. Several characters from the novels appear and the stories, set in the 10 year gap mentioned in Chapter 27 of A Princess of Mars does leave a lot open. On the other hand, the series also seemed to suffer from Conan-itis. John working with his enemy and fighting a green monster eating people seem like something from the Conan book Marvel published at the time. There is also the issue of the Comics Code Authority. The series is aimed at older readers that the usual Spider-Man readers of the time, but for all the descriptions of blood running down John's arms, there is none. It tries to retain the swordplay and action of the novels and even throws in some limited sex but its still hamstrung by the Code. Now adays blood would flow freely and Dejah's bath in issue 7 (after getting food tossed on her) would be more suggestive.

Other things I noticed (for your comic enjoyment)
--John and Dejah at one point are admonished by Tars "there is no time for love making." Yeesh it wasn't like they were going at right then and there.
--John sports Barsoomian briefs in a bedroom scene in issue 2 while Dejah stays under the covers. Like I said, limited sex.
--An obediance collar? Kan's constant "you will call me master" dialog in issue 3 and even his statement that he plans for the "humilation of John Carter." I guess John Carter, BDSM Slave of Mars would have been a little too obvious.
--Dejah gets slapped around. A lot.
--A full page ad in issue 4 announces "The People That Time Forgot," coming soon from American International Pictures. It might not have done ERB any favors but Dana Gillespie was still the sexiest cavegirl this side of Raquel Welch.
--Issue 2 also contains Marvel's announcement of their adapation of the "Greatest Space Fantasy Film of All." Cue John Williams and C-3P0.
--There has been some concern that Dejah will become Xena Warrior Princess in the upcoming movie. Marvel's already beaten to the punch, with Dejah kicking butt in issue 7.
--Not that doesn't spare her some indignities. At one point she has to bathe and her guard just stands there. Privacy issues weren't much on Barsoom.
--Barsoomians look pink not red. And at one point a Warhoonian yells "here comes a red man" as John approaches. Are they color blind?
--The White Apes sport Mr. T mohawks and one carries Dejah around like Fay Wray.
--In typical comic book fashion, the covers don't match the stories. Issue 3 has John standing over a dead ape while issue 7 has him standing protecting Dejah from gunfire.
--Dejah is still the hottest Martian ever. Even if her skin color changes constantly.
at July 02, 2009