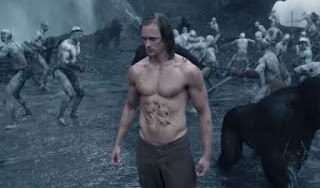 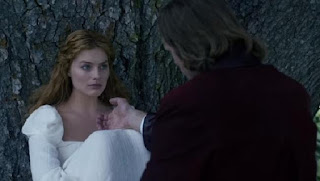 Now that I've had a chance to watch and rewatch the latest trailer, here's my thoughts, questions and what I thought worked. Enjoy!

--The origin story is in the movie? The trailer's first part is the most surprising, especially since many descriptions of the film have hinted that it would bypass the origin and is picking up after Tarzan had accepted his role as Lord Greystoke. Now maybe this is flashbacks or presented in another fashion-the first trailer for example showed what looked like a dime novel/penny dreadful magazine recounting a Tarzan adventure-or someone got concerned that younger audiences would be unfamiliar with Tarzan and his origin that it has been added. We'll see how this plays out.

--What's the story here? A criticism here is that this trailer doesn't lay out much of the film's plot, other than a generic "Jane has been kidnapped" arc and something about thousands of men standing between Tarzan and his goals. Warners might be saving this for a latter trailer or are following the path that The Force Awakens took where the actual story-line wasn't revealed in the marketing but to some it may come across as another empty action spectacle.

--"Like a damsel?" If something did come across it was that Margot Robbie's Jane Porter won't be a brunette with a British accent. And while I'm sure some will moan and groan about her coming across as a "damsel" take a second look. First time we see her here she is setting in a tree, she spits or even possibly head butts Christoph Waltz' character Leon Rom and makes it clear her husband isn't a normal man and that she isn't intimidated.

--Tarzan don't speak? One comment I've noticed is that in neither trailer have we heard Alexander Skarsgard speak. I don't know if they're doing a bunch of looping in post production, are waiting to have him speak later or just playing up Tarzan's strong but silent type. It's similiar to how some noticed we didn't hear Wonder Woman say a word in the early trailers for Batman V Superman so there might be a game plan there.

--Enemies at home. One of the voiceovers-sounding a lot like John Hurt-mentions that Tarzan needs to go home, back to the jungle and possibly there will be enemies. Which enemies does he refer to? Mbonga (played by Djimon Hounsou), Waltz' character or even the jungle itself? Also will there be the rivalry between Kerchak and Tarzan present in Tarzan of the Apes? Again more questions.

--Wildebeest stampede? Looks too CGI. Granted I'm not complaining as many are (not all movies are going to be practical effects) but this one shot does jar.

--Samuel L. Jackson. Not as much of Sam here compared to the first one. We do hear him and see some brief shots but this one seems to be downplaying his part. That might be a smart move so that he doesn't overshadow Skarsgard and Robbie.

There's my thoughts on this. Was it a great trailer? No but it did show enough to give this ERB fan hope that for once Tarzan of the Apes will be shown on screen. If you noticed anything I missed leave your thoughts below.
at March 20, 2016

It starting to look sure the apes are really supposed to be the Mangani in the movie. There was a leaker on the IMDb forum who said that, and now Sellers has an interview on his blog where somebody - perhaps the same somebody, perhaps somebody else - who says he has seen one of the test screenings says the same. Combine that with the way they behave and look in the trailers - not much like actual gorillas do - and it really seems almost certain that they are.

I rather wish they will reveal that in some trailer, one of the complaints seen is that they are unlike real gorillas. :)

I like most of what I have seen so far. It seems, so far, that the movie has kept most of the premises of the ERB Tarzan, updated respectfully and is in the action adventure genre. Also it has been claimed that the actual source the film takes from is one of the more recent comics, not the novels, but if so they seem to be comics which had used a lot from the novels. Dark Horse? You read comics, do you have any knowledge or ideas? I have no problems with that, as long as the original characters and the whole feel of it is recognizable as coming from what ERB created, I am a fan of his but not a purist in that way.

The latest maybe leaker also says that the CGI is still mostly unfinished, but that what had been finished looked quite good. Sounds plausible, it is still several months to the premiere and CGI is something which takes time, and tends to be fiddled with up to the last minute from what I understand, so hopefully all of it will look better in the finished film, including the gnu stampede (I just like that word better than wildebeest :D)