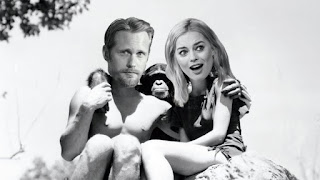 Well if you're wondering why we haven't seen anything yet from David Yates' Tarzan, the Hollywood Reporter may have the answer. In a new article titled "Warner Bros. Faces 'Tarzan' Trouble as Director Is Double-Booked" reported problems have emerged, including a studio nervous by both reported test screenings of Tarzan, a reported $180 million budget for the film and the recent failure of Warner's bid budget fantasy Pan. The biggest problem though is that Yates is now busy shooting the studio's Harry Potter spinoff Fantastic Beasts and Where to Find Them to work on Tarzan and the passing of producer Jerry Weintraub has left the production without a supporter.

It sounds like the main takeaway is that Warner Bros. is too busy putting their money and support behind their DC Cinematic Universe, the Potter franchise and little else. If Tarzan is having problems behind the scenes they may still result in an excellent or successful motion picture or at worst another John Carter sized bomb. For more check out http://www.hollywoodreporter.com/news/warner-bros-faces-tarzan-trouble-831921 and leave any thoughts below.
at October 14, 2015