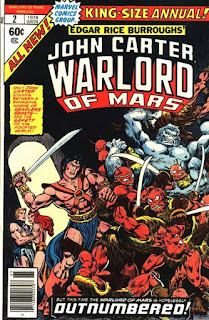 We continue the "king-size" adventures of John Carter as he confronts "The Headmen of Mars!"

While testing a new flagship of Tardors Mors, Carter, Dejah Thoris and Tars Tarkas find themselves caught in a huge storm that knocks the ship's captain overboard. Using an equilibrimotor Carter rescues the captain but gets knocked out and disappears into the storm. Luckily for him the motor remains on and he floats to ground safely. Unfortunately for him he lands in Bantoom, home of the Kaldanes and their leader Taak, who has teamed with mad scientist Ras Thavas to launch a sneak attack on the cities of Barsoom. With help from an outcast Kaldane and a great white ape who has also gone under Thavas' knife, Carter attempts to foil their plans.

I remember this issue being a mess before and I'll admit it isn't, But it is a hodgepodge of ideas and characters lifted from latter novels like The Chessmen of Mars and The Master Mind of Mars that contradicts those stories (like Carter's discovery of Bantoom when Edgar Rice Burroughs makes it clear that Tara is the first Red person to find it) but there is still a rousing tale with enough ghoulish imagery to make it readable. An interesting note is that this annual is written by Bill Mantlo, the co-creator of Rocket Raccoon and he does a good job keeping the pace going.

The Ernie Chan artwork is also good but filled with odd choices. Ras Thavas for example is depicted basically as a Kaldane instead of the withered old man Burroughs describes but beyond that the characters are handled well and the action scenes drawn with a clear focused hand.

I guess memories can play tricks since "The Headmen of Mars" is a much better issue that I remember that fans will enjoy as long as they accept some of the ideas presented. Next time we wrap up  (I promise!) the 1970s John Carter, Warlord of Mars saga with "Amazons on Mars!"
at October 04, 2015