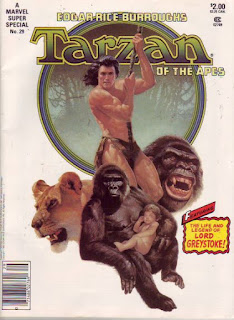 I promised more "retro comics" reviews, so prepare for "The Life and Legend of Lord Greystoke!"

A little history first. Following the cancellation of Marvel's Tarzan, Lord of the Jungle series, the character disappeared from comic books until Marvel brought out an adaption that while the print date says 1983 was probably meant to tie in with the theatrical release of Greystoke the following year. This version first appeared as a two-part limited series and then was reprinted as one of Marvel's "Super Special" titles in a magazine format.

With that out of the way, if you've read Tarzan of the Apes then there is no need for a plot recap, as writers Sharman DiVono and Mark Evanier does a good job adapting the first part of Edgar Rice Burroughs' novel. From the mutiny on the Fuwalda to the horrible demises of John and Alice Clayton to the love of Kala and Tarzan's growth into the leader of the Mangani, it's all there in one of the more faithful adaptations of the novel in any media. Some might grumble about needing to streamline but for others they will love that nothing has been left out or changed for unnecessary reasons.

Helping is the artwork by Dan Spiegle that captures the characters and the jungle setting vividly, helped by excellent coloring and shading work. From the opening with the Claytons to the Mangani they are handled wonderfully and brought to life with care. There are several artists associated with Tarzan in comics and while this might top their best work it comes close.

Tarzan fans probably already have this somewhere in their collections but if you don't try to track down a copy (I found mine for two bucks). While it might have been nice if Marvel had completed the story and adapted the entire novel it's still a good attempt at the classic. Next time another Marvel/ERB special gets reviewed.
at August 29, 2015