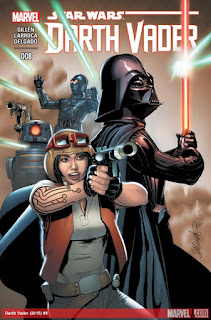 Following last issue, Doctor Aphra and her robots have teamed up with a ragtag group of bounty hunters to rob an Imperial cruiser. When that is a success they disband (talk about a short trip), leaving Aphra with a new assignment from Darth Vader. Meanwhile the Dark Lord has to put up with Grand General Taggee and a new group of underlings that just get on his nerves. Man I miss the old Vader who had no problem putting that Force Choke on them.

Maybe it was just me or the fact that the current issue of Star Wars was a strong one but this story just left me flat. Maybe it was the fact that much of it was just talking with little resolved. Or that writer Kieron Gillen throws in too many new characters who don't pop or stand out. Or that Darth Vader is barely in this and spends most of the time being talked down to by these guys.

On the plus side Salvador Larroca's artwork was great and eye-catching. So at least there is that.

I hope the next issue picks up the tempo and gives us more Vader and action. Until next time fellow readers.
at August 07, 2015