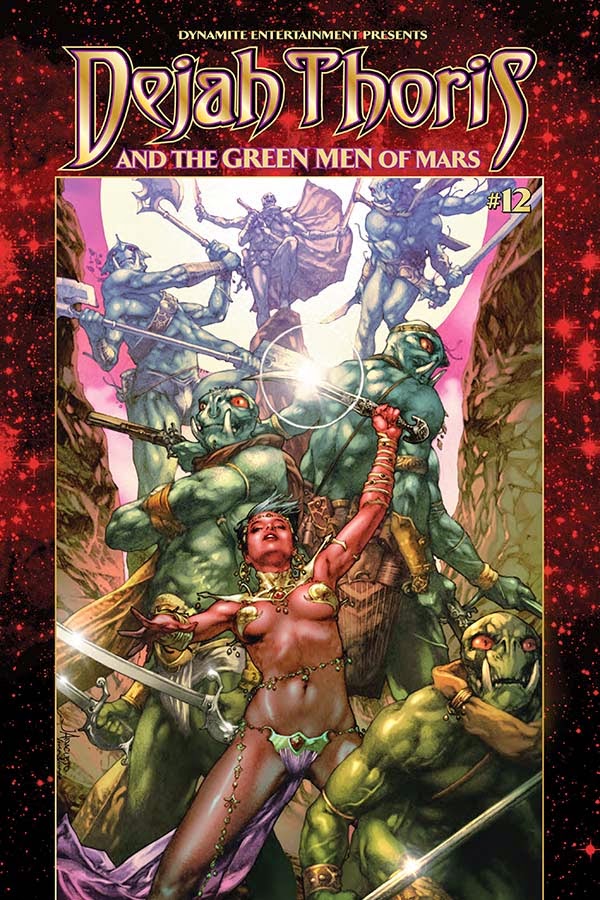 One of the late comic reviews I hope to get caught up with finds Dejah and her Thark team coming to the end of their mission.

With the "Red Monster" about to blast Helium, Dejah and her team make their last stand, causing mass chaos. Ultimately Dejah alone must bring down the monster within and without...and that's about it.

Honestly not much happens here folks. Dejah and Zon Tar the Thark attack, destroy the device and have a small hear to heart that seems to cause Dejah to stop her death wish and embrace life and her beloved John Carter. Some of this I figure is due to the constant expansion of the series from its original four issues to twelve, leaving writer Mark Rahner and company scrambling to fill out the issue count with something. While it does have some good moments it just seems a rather unsatisfying ending. It could just be me but that's how I see it.

On the plus side, the artwork by Jethro Morales at least helps keep the story visually interesting, even when it stumbles. Sometimes good artwork can help balance out an uneven story and Morales does his best to keep it moving.

In fact everyone does their best to keep it up but the end result just feels anticlimactic and running on empty at this point. So if you reached this point just prepare your expectations accordingly and you might enjoy it or may feel let down or feel that this should have ended a long time back. Hopefully we haven't seen the end of Barsoom from Dynamite but let's hope that in the future it has a purpose instead of filler. Next time I'll be catching up with another late review.