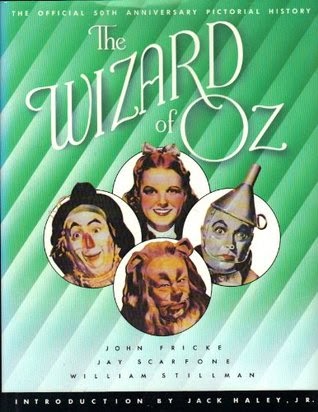 With the 75th anniversary of one of the greatest films ever made, here's a look...at a book celebrating the 50th. (I know that's 25 years late but...)

Released in 1989, this book was originally conceived by authors John Fricke, Jay Scarfone and William Stillman as a "pictorial history" of the film, showing off several previously unseen photos, artwork and memorabilia but digging into MGM's archives the trio decided to delve into the film's production history, which has already been covered in previous books (most notably Aljean Harmetz's The Making of The Wizard of Oz). Today most of the film's stories-both real and exaggerated-have been covered in other books, documentaries and specials so looking at this book now there isn't much in the way of surprises or big revelations.

What there is though is a true love for the film and it shows through the story, one of major production hiccups, a reluctant studio, gossip and predictions that the film would fail. You have to wonder if the movie was being made today, the likes of Nikki Finke and her ilk would had already pegged it a turkey. All of that is covered, along with the excitement that the film stirred in its makers and the viewers back in 1939 (the book actually takes the down the current myth of the film being rejected by everyone then and instead shows a film widely embraced and that its financial fate had more to do with other circumstances rather than flat out rejection).

But what makes the book nifty is that "pictorial" slant. Starting with original cover art for L. Frank Baum's original novels along with concept ideas, test photos of the cast-including original Tin Man Buddy Ebsen-behind the scene shots and promo stills and posters, many I admit I have never seen. The book also does a nice job dividing up the history of the project, from Baum to its status as a television perennial-in entertaining and easy fashion.

At this point there has been several more Oz behind the scene books written, but this one is a definite good one if you can find it. For fans of the movie it's a no brainer. Rating: **** out of 4.