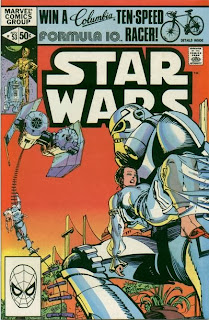 Hey, I hope you guys are keeping warm. With the recent news of Star Wars return to Marvel I decided to take a look back. So get ready to meet Aron Peacebringer, Warlord of Calian!

Floating above a sector that the Empire suddenly seems interested in, Princess Leia finds herself crash landing on the unexplored planet after an explosion cripples her shuttle. Fighting off strange inhabitants she is rescued by the aforementioned Peacebringer and his men but since they do not speak the same language find communicating complicated. After taking her back to his palace, Leia begins to trust her new comrade and his wife, the incomparable Alisandre. But with possible traitors in their midst, giant stormtroopers and some growing affection for Leia questioning his own marriage, Aron finds himself having to face a new threat...

In some respects the backstory of this issue-and the next one-is probably more interesting than the actual plot. In short, artist Carmine Infantino-who had drawn for the Star Wars comics-had been hired to do artwork for Marvel's John Carter: Warlord of Mars title but the series was cancelled before Infantino had finished. Not wanting to let it go to waste, Marvel tasked writer Chris Claremont and fellow artist Walt Simonson to fashion a story for the Star Wars series out of the artwork and well you get a feeling what would had happen if Edgar Rice Burroughs and George Lucas' creations met.

In fact for an ERB fan noticing the touches Claremont brings to the story directly from Burroughs is a lot of fun. From a Woola-like pet named Chiba to Aron's concern that the real culprits behind his latest troubles are "those insulted deities" who cult he had broken apart-a la the Therns. There is even a dance between Aron and his wife similar to the dance that opens The Chessmen of Mars. In addition Claremont handles Leia pretty well, touching on something that has been touched upon in the current Dark Horse Star Wars title, her feeling of hurt and loneliness after the destruction of Alderaan, which adds some depth to her story in this issue.

As for the art, surprisingly there isn't much of a clash between Infantino and Simonson's styles as the work is nice and wonderfully drawn. As shown below... 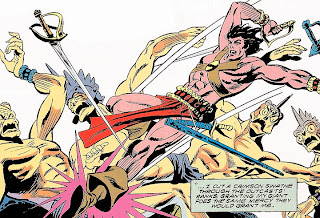 it really rocks. Plus you can see the original John Carter influence. And honestly it's just cool that three of the biggest name in comics is tackling Burroughs and Star Wars at the same time.

So if you have the complete Marvel run of John Carter, you might want to seek this issue and number 54 out. Take care folks.
at January 04, 2014