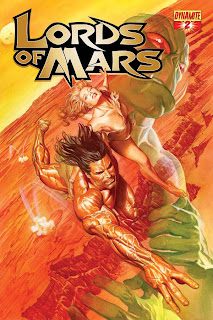 As usual no snappy opening.

While exploring the cave they were chased into, Tarzan and Jane find themselves zapped by a strange machine and wake up on Mars, where they help a young Thern named Khen Thanos from a bunch of red men who are attacking him. Revealing that the Therns can speak Earth English he takes Tarzan and Jane to meet his father, the new leader of the Therns, Jagati Khen. However it is part of a plan to get Tarzan to help remove the Therns' major enemy, the "dictator" of Barsoom-John Carter!

Like the previous issue this one is more setup with Tarzan and Jane's arrival on Barsoom via a machine that looks like one of those devices from old Frankenstein movies, building up the Thern deception about Carter and John and Dejah Thoris' own suspicions as well as Carter's unease about being seen as a "god." While I'm sure some would like the story to hurry up I like the build up that Arvid Nelson is doing, establishing both Tarzan and John Carter's roles as well as reminding the reader of the treachery if the Therns and their goal to reclaim their glory and hold.

The story is also helped by Roberto Castro's excellent artwork, which brings the story alive visually. The characters are well handled and what action there is is handled well and skillfully. There are a few choices that I wonder about-the Jabba the Hutt look of Jagati Then for example-but otherwise it's top notch work.

I'm giving issue 2 a solid A plus for setup and just flat out fun. What more do you want?

Awesome cover! Is it Jusko?