David Yates' "Tarzan" Back on Track 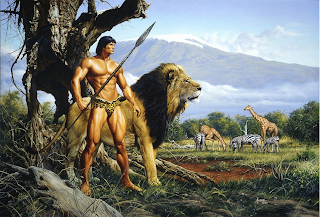 It looks like Tarzan will be ready to let loose the bull ape cry after all. According to Variety, director David Yates' film is now back on track after Warner Bros suspended production after concerns over the costs http://variety.com/2013/film/news/christoph-waltz-tarzan-1200665414/ . The article also has some news on the potential casting, with Oscar winner Christoph Waltz being considered for the villain "a  military figure that crosses paths with the King of the Jungle." The article does not mention if Alexander Skarsgard is still in contention to play Tarzan but according to a source actresses Emma Stone and Margot Robbie are front runners for the role of Jane. UPDATE: The Hollywood Reporter has more news about the film and Waltz' role in it. According to http://www.hollywoodreporter.com/heat-vision/christoph-waltz-talks-tarzan-637398 Waltz will play a Belgian Solider named Captain Rom, who attempts to capture Tarzan in exchange for priceless diamonds. The report also confirms Skarsgard's casting as Tarzan and that Dark Horse Productions-a spinoff of the comic book company that published Tarzan back in the 1990s-is co-producing with Jerry Weintraub Productions. The film looks to begin filming if all goes to plan next year for a possible 2015 release date.
at September 26, 2013

This Bleedingcool piece also says that Jamie Foxx was in talks, most likely to fill in the part Samuel Jackson was supposed to play. Either way, nice Django Unchained reunion!