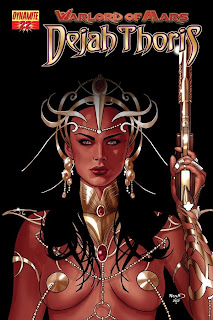 This week's adventure finds machine men, a wild melee and a princess strapped to a table. What more do you want?

Now a prisoner of the very much alive-and half robotic-former Jeddak of Yorn, Dejah is about to suffer the same fate when luck intervenes. Or in this case assassins from the rival guilds of Xam Lin and Rak Nor, both of who have followed Dejah and poor Gunbor to the location. Soon there is a massive chaos as Yorn has his machine men attack, Dejah escapes from being turned into a machine and Gunbor rediscovers his Barsoomanity.

I have to admit this was a rather speedy wrap up for this story line. I liked the first issue since it was a return to the criminal underworld of Barsoom but when it turned into robot men it seemed to take a left turn. I guess considering some of the past story lines in this series it should be expected. Still the combo of Robert Napton and Carlos Rafael does a good job wrapping it up. Here's some things to look for though:
So while not the ending I thought would happen it still delivers the standard action and weird turns this series is exceeding at. Hey it's a hot princess saving a planet, what can I say?
at February 16, 2013