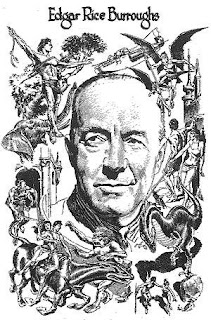 ﻿I'll just cut out the clever opening here and just report the news. A new anthology book called The Worlds of Edgar Rice Burroughs has been announced and will be hitting bookstores this October from Baen Books. The anthology is being edited by science fiction writer Mike Resnick and Bob Garcia and Resnick has posted the lineup on his official site http://mikeresnick.com/?p=1473 of the stories and writers, all of them new except for one, Resnick's own The Forgotten Sea of Mars, which was published in the 1960s and is finally getting republished. Here's the list as posted:
All in all it sounds like a good list of writers so we'll keep an eye on this and give more info when it becomes available.
at January 28, 2013

That looks great! That reminds me I still have to read the Under the Moons of Mars anthology...

Don't bother with Under The Moons of Mars... it was dreadful