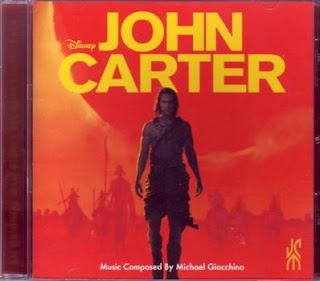 ﻿Sorry for the lack of news or anything. I've been fighting a bad cold and I am still under the weather. I did however finish reading Tarzan: The Greystoke Legacy so I'll have a review up soon. In this case though some good news for fans of John Carter: Michael Giacchino's score has been picked as the second best score of 2012 by "ScoreKeeper" at Aint It Cool News. I'll admit that Giacchino's music was one of the best things in the film, capturing the epic scope and emotion better than the actual film did. Plus it's nice to see the film receive something other than "worst of" lists. You can check out the rest of SK's picks at http://www.aintitcool.com/node/60393 (and thanks to frequent John Carter Files poster Pascalahad for the link).
at January 18, 2013

You're welcome :). I love Giacchino's work ever since his video games soundtrack (heresy, I prefer his Jurassic Park Lost World video game soundtrack to John Williams' film score!). He's one of just three composers I buy the CDs blindly without listening to a single cue beforehand (the two others are Doctor Who's Murray Gold and DC animated movie's Christopher Drake). And so far I was never disappointed!

The irony on John Carter is that Michael Giacchino we're sure never read the book before working on the movie, and he did nonetheless the hell of a job on it!