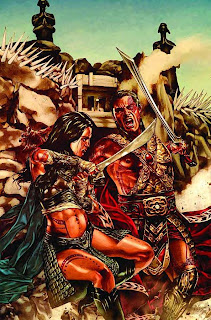 While we wait for the next piece of movie news, we'll return to the dueling Barsoomian comic books clamoring for your money. And what does this issue deliver? Warhoons, savage calots, more kickboxing Dejah and bickering. Yes bickering.
When we last left off, Dejah Thoris had ran off into a sandstorm to escape her captor, Sab Than, when she took a fall down a hole. But instead of landing in Wonderland she finds herself again captured by Sab but shows off her Van Damme abilities and manages to escape...only to run into Warhoons who immediately throw her to the dogs. Literally as she must fight for her life against a pack of wild calots. Meanwhile Tal Hajus, Tars Tarkas and the female Thark Laos continue their quest and spend most of it arguing with each other, especially about Tal leaving everything to Tars to fight off. Eventually our group reaches the fabled Citadel of the fabled Warhoon Gothan, only to find what appears to be an empty space. But it's a mirage, hiding the Citadel where they find what they are looking for...
I have to admit, my opinions about this series has dropped a little from the excellent first issue. The second one was OK but this one is a mixed bag. First the good news-the artwork by Luke Ross is still excellent, capturing the looks of the Warhoons and the Calots (imagine an angry Woola) well while sticking to how they look in the film. He also handles the big action set pieces and manages to keep the reader's eyes glued to the page.
Where the issue falters a little is the writing. Again I don't know if it's Peter David's script or the fact that he's stuck with the ideas that Andrew Stanton has come up with for the film but I'm sorry-Dejah Thoris has become an idiot! Seriously she escapes, and gets caught. She escapes again and gets caught again. For someone who has been now rebooted into a kickboxing, sword wielding warrior woman she's turning into the least plausible one in a long time. Granted even John Carter would have problems taking down a pack of wild Calots but still her constant kicking of Sab's butt and yet being unable to get away brings laughs. The Thark section works fine and in some ways I wish the series was just about that.
In the end if you enjoyed the first two issues this one is entertaining but uneven. With one more issue to go hopefully it will pay off in a big way.
at December 19, 2011