Thor 2: And the Next Potential Director Is.... 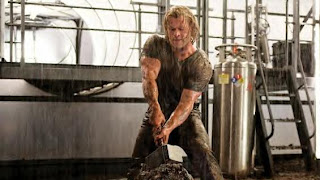 Sorry for the lack of updates this week. It might be a little erratic on here for a while but I'll try to keep it updated as much as I can. Now with that out of the way, earlier this week it was announced that director Patty Jenkins had bowed out directing Thor 2, citing the usual "creative differences." Well now according to the Hollywood Reporter, Marvel has zeroed in on two possible replacements: Alan Taylor and Daniel Minahan, both who directed episodes of HBO's epic fantasy series Game of Thrones. The article also reveals that several screenwriters have been approached to pen the sequel, including Robert Rodat (Saving Private Ryan) and Roger Avary (who co-wrote Pulp Fiction.) You can check out the full article at http://www.hollywoodreporter.com/heat-vision/thor-2-alan-taylor-daniel-minahan-272033
at December 09, 2011