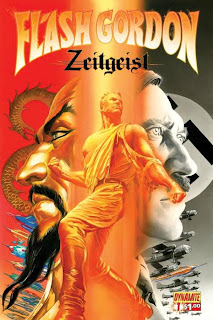 OK I promised a review and here it is. Some spoilers ahead so bear that in mind while reading, otherwise FLASHHHH!!!
It's the year 1934 and the Earth is being bombarded by mysterious events and strange phenomena courtesy of the supreme ruler of Mongo, Ming the Merciless. The attacks also have another motive-to speed the conquest of Earth by a "proxy" ruler that was selected. While Ming plans his next move, polo player Flash Gordon and cartographer Dale Arden have to bail out over Geneva, Switzerland when their plane is destroyed. The two land near the house of Dr. Hans Zarkov who plans to launch a rocket into space to stop the attacks and become his unwilling co-passengers. As they head for space, another group comes to Earth, preparing their own mission to stop Ming and his chosen human ruler...
I have to admit I had mixed reaction when Dynamite announced they were going to publish their own Flash Gordon series. While I've enjoyed their Warlord of Mars and Fall of Barsoom series, I've been split on Dejah Thoris and found their Buck Rogers series underwhelming. Well thankfully-so far-this series looks to be going in the right direction. What I particularly enjoyed was the decision to keep the time period of Alex Raymond's original strips instead of bringing it into the future. Writer Eric Trautman manages to keep the basic plot of Raymond's work and add new ideas without destroying the essence of the original. The changes that have been made are also interesting-Dale Arden is now working for the US State Department and the revelation of Ming's chosen ruler (even though the cover art basically reveals the big surprise)-and he even throws in some homages to other versions of the characters that fans might get a good chuckle from.
Art wise the real driving force is Alex Ross, who provided the cover art shown above and the designs for the characters. Here he and artist Daniel Indro replicate Raymond's original looks for the three lead characters while managing to make them look vibrant and appealing. For Ming it looks like they took their cue from Max Von Sydow's Ming in the 1980 film-maybe not surprising since Ross has admitted to being a huge fan of the film-while some female slaves are definitely drawn in a matter that would have been too racy for 1934 audiences.
So in closing this first issue is a cool and fun take on a classic character and I hope the next issue is just as fun and exciting.
at December 11, 2011