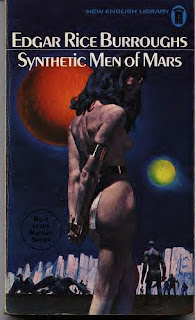 Reviewer's Note: This Review has been altered from the previous one.
As our latest Barsoomian adventure opens, things are looking dire. The beloved Dejah Thoris has been badly injured in an accident, leaving her crippled and unconscious. With Helium's best doctors unable to revive her, John Carter takes off to find Ras Thavas, the Master Mind of Mars in the hopes that he can save his wife. Along with him goes Vor Daj, a padawar in the royal army. It isn't too long though before they are captured and discover a horrifying secret-Ras Thavas has been imprisoned and has been forced to create men out living tissue. The creatures, called Hormads have taken over the small island of Morbus and plans to take over Barsoom with their indestructible army. But Vor Daj has his own concerns-the beautiful Janai. Vor Daj has his brain swapped with a Hormad in order to help save her, but when a vat of the growing tissue begins to go out of control, Vor Daj must put his wits together not only to rescue Janai but Barsoom as well.
By this time the Barsoom series was beginning to run down with Synthetic Men of Mars and it shows. Maybe it was that Burroughs was spreading himself thin trying to keep alive four major series or that he had just run out of ideas but it definetly ranks as the least of the entire series The first issue is the fact that what is supposed to be the major plot of the novel-John Carter's search for Ras Thavas-ultimately is tossed to the side and virtually forgotten about, leaving us with a rather uninteresting hero, more brain switching and the Hormads, which while they might have been interesting here just come across as silly. It also seems to recycle the whole subplot of The Master Mind of Mars in which someone-in this case Janai-develops feelings for our hero but seems unwilling to pledge her love while he's running around as a misshapen creature, just like Vad Varo's decision to retrive Vallia Dia's body. It seems a little shallow to imply that only beautiful people deserve love but I guess that's the way the story goes.
What might interest some is this riddle-did the screenwriters behind The Blob read this book? I saw on a board the idea that the growing tissue might have been the precusor to the 1958 cult favorite. I never heard anyone claim it but it seems an intriguing possibility.
But even with that this one definetly leaves the reader pining for the earlier entries. Rating: ** out of 4.
at September 24, 2009