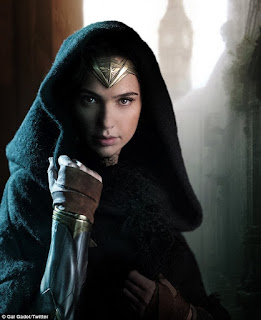 While I don't have much faith in Batman V. Superman being any good, Warner Bros. is moving forward with production on Wonder Woman with Gal Gadot as Diana and Chris Pine as Steve Trevor and the first photos have emerged via the Daily Mail http://www.dailymail.co.uk/tvshowbiz/article-3338482/PICTURE-EXCLUSIVE-Gal-Gadot-Chris-Pine-spotted-filming-Wonder-Woman-alongside-150-extras-Essex.html. What's interesting is that the photos confirm that the film will be a period piece set during World War I instead of II (probably to avoid comparisons with Captain America: The First Avenger) so we'll see. Given that I loved WW as a kid I hope at least this one will work so head over and check out the photos and stay tuned.
at November 29, 2015