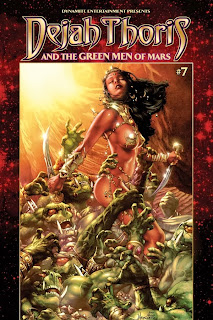 After revealing her feelings to fellow survivor Teevine, Dejah begins to exhibit post traumatic stress (or the Barsoomian equivalent of it). But it really hits the fan when she attends a wedding (between a Thark and a Red Woman-I'll say no more) Dejah flips out when a mystery package arrives from the evil Voro. Deciding there will be no relief in her life until she settles this, she releases the Thark Zon Tar with a message-a meeting in the Green Dome, where one two people enters, only one person leaves (cue a chorus of "We Don't Need Another Hero").

OK this issue is pretty much just setup, showing that expanding the story to 12 issues might needed questioning. I did think showing Dejah's vulnerability and her fear that she is losing control of her life is an interesting concept and how even John Carter is unable to help her adds to the drama. But the last page's decision to basically go to Thunderdome...well as long as a blind ape doesn't show up.

The art in this issue by Lui Antonio also has some weird choices. Possibly to show Dejah's mental state, all the wedding guests are just ghostly blue and non descript, a choice that calls too much attention to itself. Beyond that it's the usual good job with the darker look and artwork befitting the story being told.

I'll close by saying that this was OK, nothing more. I'll be back soon.